Megan McArdle at Atlantic.com’s Asymmetrical Information calls out Paul Krugman and his latest prediction for “Recession”-- noting he has been worrying about one for quite some time. She lists a series of Krugman quotes:

--"We have a sluggish economy, which is, for all practical purposes, in recession..." — Paul Krugman, May 2003

--"If housing prices actually started falling, we'd be looking at [an economy pushed] right back into recession. That's why it's so ominous to see signs that America's housing market...is approaching the final, feverish stages of a speculative bubble." — Paul Krugman, May 2005

--"But based on what we know now, there’s an economic slowdown coming." - Paul Krugman, August 2006

--"this kind of confusion about what’s going on is what typically happens when the economy is at a turning point, when an economic expansion is about to turn into a recession" - Paul Krugman, December 2006

So, how does all this doom compare to the economic record? 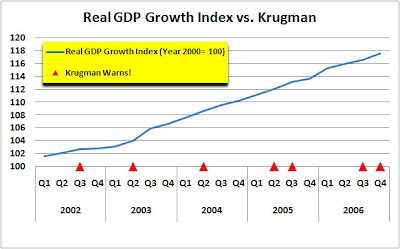 Eventually of course we will have a recession and Krugman will get lucky... just like the proverbial ‘blind pig’. The real question is: how deep and how long ?

At McArdle’s place I commented with an extract of a G.B. Shaw quote:

"If all the economists were laid end to end, they'd never reach a conclusion."

Which I enjoy only marginally more than:

Q: Why did God make economists?
A: To make the Weathermen look good.

I loved Econ in college (sick, I know) but I've always marveled at how economists who live by the phrase of "All other factors held constant" never seem to fully appreciate how fantastic that assumption really is.
Posted by SMSgt Mac at 20:38