More ‘Verde’ Than You…

So…. A few weeks ago, I was driving back from a visit to my friends and their new beach house in my 2007 Ford Focus, doing ‘about’ the speed limit (translation 3-5 over) and I get this guy (In the unisex Chicago sense of the word) going about 5-10 mph faster than me coming up from behind. We’re on the twisty Hwy 126 between Santa Clarita and Port Hueneme (in the People's Republik of CA).

The traffic on the road clears up a bit as we near Santa Clarita and ‘Eco-boy/girl’ whips around on the left and passes me, and asks me (in writing!) the question: 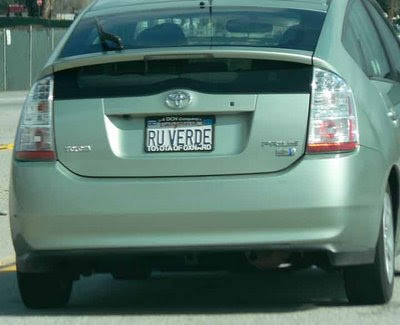 Hmmmm. Now, I lived in an earth-bermed solar home in Northern Utah for ten years. I LOVED the fact that my energy bills in the dead of winter were only equal to about 5% of ANY of my neighbor’s energy bills- BUT!-Not even once, EVER!, did I get an urge strike out on a sacred campaign or did it occur to me to question how anyone else lived. I reasoned (and still do) that everyone gets to make their own choices for their own reasons.

Now this pile of piety believes he/she has a mission to ask everyone he/she passes on the road if they are 'Verde'?

Hmmm. Am I “Verde”? Well… Let’s do a side-by-side comparison shall we?

Vehicle Operation
First, according to one road test, your slime-green Prius only gets a very few more miles to the gallon than my Focus does in the real world at real highway speeds: and that is ONLY if you are driving rationally in the first place. This test bothered the acolytes of the hybrid religion enough to cause them to attempt to rationalize away the disparity between the Prius’ computer calculations and the measured gallons needed to refill the Prius’ tank by claiming that the Prius’ tank construction MIGHT or COULD have caused refill volumes to vary and skew the test. This rationalization gets cherry-picked by treehugger.com who conveniently fails to note that the critique itself is pretty well debunked soon after in the same thread. There’s some other real and imagined problems with the ‘test’, some relevant some not, but the bottom line is that unless you drive the Prius like a complete energy-managing jerk on the highway, you are NOT going to get all that much better mileage than someone else who was driving a small and economical internal combustion vehicle if THEY were also driving like a complete energy-swapping jerk. (My heart warms knowing there are boards and websites out there on HOW to drive like an idiot in the pursuit of the magical maximum Prius MPG. )

Now, having observed your driving style Zippy, I submit that I’m getting as good as or better mileage than you are. Notice I didn’t even bring up the reality of battery replacement costs that are coming down the road.

(Side Note: Please spread this among the faithful: CO2 is NOT a pollutant, and the EPA can’t make it a pollutant any more than a law can successfully make Pi =3.)

Advantage: Focus (or Maybe at worst a Tie)

But what about the other relative eco-life-cycle costs?

Vehicle Manufacturing
“Dust to Dust”, a 'study' claiming less energy expended per mile driven for a Hummer vs. a Prius over the operational lives of each caused quite a ‘dust-up’ itself among the Enviros, spawning self-righteous denunciations from the true believers (see here and here). Admittedly, there was much to criticize Dust to Dust about. But while I do not accept the critics’ views of the Dust to Dust piece entirely I find their criticisms generally have some merit, but they miss (for their own reasons I'm sure) the true problem with Dust to Dust: It was a grandstanding comparison between too dissimilar vehicles.

Dust to Dust got the press’ attention, so you could call it a complete success by one measure. But now we have to listen to the legions of Prius fans thumping their chests over what should be a ‘no duh’ point: Prius has a smaller carbon footprint than a Hummer. Worst of all, the points concerning the environmental damage that is a product of Prius’ battery production, AND the fact that making it is much less earth-friendly than building something like my Focus, a comparable car, is simply lost in the noise.

Vehicle Disposal
Well we’ve covered manufacturing and use: That leaves disposition of the remains at the end-of-life. Since the only thing really different between the Prius (and other similar hybrids of course) is the electrical side of the propulsion package in the Prius, and both cars have an internal combustion propulsion system as well, the waste stream is therefore more complex with more components for the Prius. Fortunately, automobiles contain perhaps the highest percentage of recyclable components of any consumer product, so the extra burden of recycling the battery/charging elements can’t be too much higher than a conventional automobile of similar size, although relative toxin content has to weigh more heavily towards the hybrids. Toyota even has a recycling program that only Heaven knows if it will survive the future wave of obsolete and no-longer-trendy Prius retirements that will come someday. I’ll cut the Prius some slack.

Therefore, in case you missed my earlier answer to your question:

Since you asked, I am MORE ‘Verde’ than you, you self-aggrandizing, brain-dead, punk-a** pinhead.

Honestly, the world is full of these types. How do the rest of us survive?

Epilogue:
I almost forgot: After rushing up on me in their poor-handling, high body-rolling POS hybrid econobox, and whipping (as much as a Prius can 'whip' anyway- more like 'lurching')around me as soon as it cleared enough, Zippy here came back into my lane, hit the brakes and turned right shortly after I snapped the pic. I had to swerve to get around him.