Instapundit has a good post up on the NIMBY - Wind Farm issue, and one of his readers (a Ms. Jackson) sent in a nice shot of the Tehachapi wind farm as seen from Mojave Airport.

I left that area (the Antelope Valley) in 2003 after living there for a decade. I watched the number and size of windmills grow while flying in and out of Edwards AFB for a decade before that (been blinded flying over the solar farm east of there too). Ms Jackson is spot on in everything she says.

However, there is a lot NOT to love about them.

My last boss in CA is a 'Birder'. I consider him a responsible conservationist (rational) and not a rabid 'environmentalist' (emotive) by any measure - He IS an engineer after all. He's a member of the Audubon Society and often burns some of his vacation time in the mountains just north of Tehachapi doing volunteer work collecting data on migratory birds. It turns out that the Tehachapi wind farm is planted right in the middle of the Pacific Flyway, one of the major U.S. migratory bird routes. (They have pretty much the same problem at Altamont.)

Birders (like him) refer to these wind generators as "Bird Cuisinarts" or "fill-in-bird-name-here" Cuisinarts. At certain times of the year dead birds are known to pile up at the bases of towers.

Here's a map of the major migratory bird routes in the United States.
And here is where the best wind (class 3 or above) for wind turbines is found in the U.S. 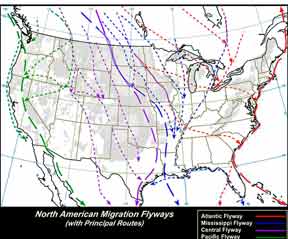 It makes one wonder: perhaps smart birds use the wind to their advantage, or that the same conditions that create high winds (like mountain ridges) might also have some other aspect (shelter?) that facilitates bird migration?

It also irritates me that when advocates of Wind Power talk about “waste streams” they never mention the waste stream from manufacturing wind generator systems and infrastructure. I live just off a major interstate and I frequently see trucks with loads of huge generator blades and housings made out of composites – and composite work tends to have nasty waste byproducts, and electronics often do as well.

Wind power conceivably has lower or more benign waste streams compared to many other energy sources but nonetheless there still has to be one. I say conceivably, because I don't think even the industry really knows: they’re taken at face value as being ‘better’ than other power sources.
Posted by SMSgt Mac at 22:45

Email ThisBlogThis!Share to TwitterShare to FacebookShare to Pinterest
Labels: Energy, Politics, The Left

I talked to your former boss yesterday. He has a few comments about the more deranged environmetalist wackos with whom he went on a project Don Luskin at "poorandstupid.com" suggests, there people are irrational, there are profits to be made.

This sort of thing needs to be discussed much more often. I'm particularly curious about the waste stream as well as the energy that goes into producing the average turbine vs. the amount it will produce over its service life.