"Sir, you lie to Girls, You don't lie to your troops"
(Apologies to the late Rodney Dangerfield)

This rant is going to start out slow because I don’t want to just cherry pick the offensive material and present it without the ‘total pitch’ AF management wants to sell. Most of the front end of this brief is rather vague ‘Mom and Apple Pie’-like and it closes with a ‘Gipper’ moment, but the middle is absolutely target rich: smoke, mirrors, misdirection, and the legendary chartsmanship for which our Air Force has always been the envy of the rest of the Department of Defense.

Here’s the first two slides after the cover slide (slides 2 & 3). There are quite a few slides in all, including cover, “question” and end slides, so most of the brief will NOT be tackled one-slide-at-a-time.
Slide #2: 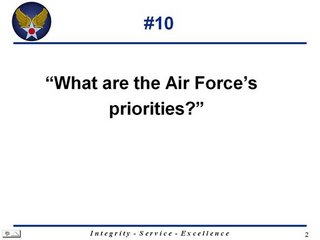 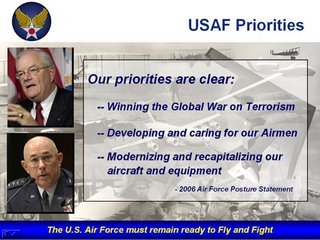 Bullet #1 is a good start! – They put the immediate pressing threat right at the top.

Bullet #2 is also a good follow up, because Airmen ARE the Air Force. This is apparently a last vestige of the “Take care of the People and the People Will Take Care of the Mission” legacy from the AF’s first 50 years.

But what is with Bullet #3? This is a goal, not a priority (and perhaps the first hint of the real overarching concern of the AF). A priority would have been the “ready to Fly and Fight” statement at the bottom of the page. What is in bullet #3 is simply activities that the AF believes must occur to be ready to “Fly and Fight” in the future. [A Cautionary Side Note: To those who would argue that bullets 2 & 3 are materially similar because they both deal with 'resources', is to self-identify oneself as a manager and not a leader. If you don't get the difference, you're NOT a leader -- no matter how many stars or stripes you might wear.]

Before the end of this briefing it will become apparent that this slide is (quite properly for a lead-in slide) ambitious: attempting three things at once. First, it attempts to eliminate the Global War On Terrorism as a point of possible contention and frame any debate on the AF’s plans and actions as being about future Air Force capabilities and of no concern to the here and now. Second, it attempts to both assuage the anxiety of the target audience over what changes may come and establish that those changes MUST happen as a point of fact – which is again an attempt to narrow the points of possible contention that would frame any possible debate. Having removed ongoing mission requirements and people issues from the debate, the brief sets the hook: the AF needs new hardware!......and begs the question as to where the money will come from. The stage is set. At a Commander’s Call, in oral form, this slide would be expressed as:

OK people, listen up. We’re going to fight this War on Terrorism and win, OK? That’s a given. And we’re going to do as much as we can to take care of everyone that will be affected by some changes we need to make to ensure our future. But what our plan is really about is making sure we have the tools and resources so we can accomplish our mission in the future.

A very wise LTC once told me long ago: "Always remember Sergeant, everything before the “but” is bullshit."
Part 2 Here
Part 3 Here.
Posted by SMSgt Mac at 15:22