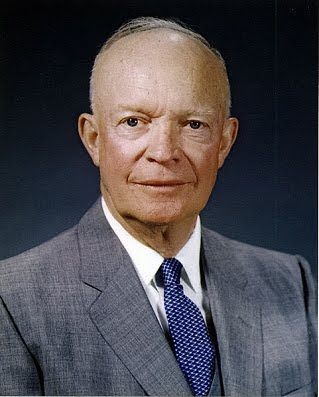 A vital element in keeping the peace is our military establishment. Our arms must be mighty, ready for instant action, so that no potential aggressor may be tempted to risk his own destruction. Our military organization today bears little relation to that known of any of my predecessors in peacetime, or, indeed, by the fighting men of World War II or Korea.

Until the latest of our world conflicts, the United States had no armaments industry. American makers of plowshares could, with time and as required, make swords as well. But we can no longer risk emergency improvisation of national defense. We have been compelled to create a permanent armaments industry of vast proportions. Added to this, three and a half million men and women are directly engaged in the defense establishment. We annually spend on military security alone more than the net income of all United States corporations.

Now this conjunction of an immense military establishment and a large arms industry is new in the American experience. The total influence -- economic, political, even spiritual -- is felt in every city, every Statehouse, every office of the Federal government. We recognize the imperative need for this development. Yet, we must not fail to comprehend its grave implications. Our toil, resources, and livelihood are all involved. So is the very structure of our society.

In the councils of government, we must guard against the acquisition of unwarranted influence, whether sought or unsought, by the military-industrial complex. The potential for the disastrous rise of misplaced power exists and will persist. We must never let the weight of this combination endanger our liberties or democratic processes. We should take nothing for granted. Only an alert and knowledgeable citizenry can compel the proper meshing of the huge industrial and military machinery of defense with our peaceful methods and goals, so that security and liberty may prosper together.

Times change. Eisenhower’s warning was actually against too much government spending – spending which suppresses the private sector activity which actually generates revenues. It was just at the time, the defense budget had not yet wound down from WW2 and Korean War levels, and the post war consumer spending was very low. Replace Eisenhower-Era spending threats with modern day ones and you would have to rewrite this speech warning against the Social Spending-Entitlement Complex. This new complex has managed to fence itself largely from that most deceptive category: discretionary spending. Yet it is still there, waiting for some people of courage to whittle it down to size.

To commemorate this anniversary, I’ve updated information from a past posting. Once again, we ask: What Military –Industrial Complex? It doesn’t exist. Even if some of these rubes might insist that it does.

Here's a graphic showing the 2010 Fortune 500 Companies and their 2010 revenues. Included are defense and non-defense companies and revenues. 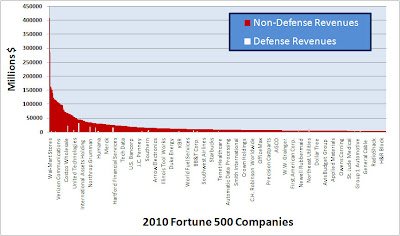 See a M-I Complex sitting there? Neither do I. Let's look closer.....

Update 22 Jan 2011: I should have also mentioned some things you probably don't know about the makeup of the current (2010) list of the Top 100 US Defense Contractors.

2. Five of the Top 100 'defense industries' are Health Care/Managment companies. (TriCare Anyone?)

5. Walmart revenues alone are about 1.6 times the total defense revenues of the Top 100 Defense Contractors.

...and don't forget we've got a war on boys and girls.


Time for the social-engineering/anti-defense crowd to get a new Bogeyman. I repeat: WHAT Military-Industrial Complex?