Updated and Bumped!
News reports today have now added a third significant 'kill' to the list of 'al-Qaida' operatives:
One "Ibrahim al-Asiri" 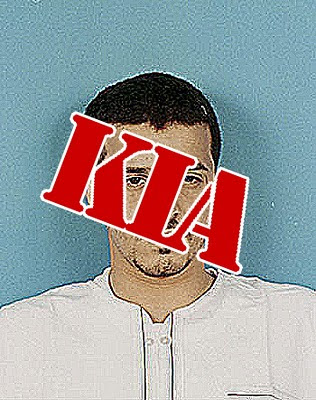 100% confirmation would be nice, but I'll take what we can get.


Original Post:
My wife was going across the TV dial looking for news with details about the good guys winning one and killing Anwar al-Awlaki (earlier video of the loser in action here). Lo and behold! Gary Johnson (s*) was just on Fox News (video) claiming this is the first time we have killed an ‘American Citizen’ instead of giving him ‘due process’. (*Sack of Sh**)

NOT in war, you Effing Idiot! 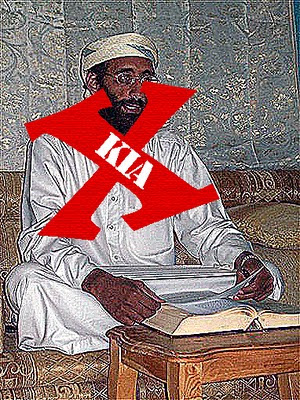 From the AP Report:


In a significant new blow to al-Qaida, U.S. airstrikes in Yemen on Friday killed Anwar al-Awlaki, an American militant cleric who became a prominent figure in the terror network's most dangerous branch, using his fluent English and Internet savvy to draw recruits for attacks in the United States…..

…The 40-year-old al-Awlaki was for years an influential mouthpiece for al-Qaida's ideology of holy war, and his English-language sermons urging attacks on the United States were widely circulated among militants in the West. But U.S. officials say he moved into a direct operational role in organizing such attacks as he hid alongside al-Qaida militants in the rugged mountains of Yemen. Most notably, they believe he was involved in recruiting and preparing a young Nigerian who on Christmas Day 2009 tried to blow up a U.S. airliner heading to Detroit, failing only because he botched the detonation of explosives sewn into his underpants.

Yemen's Defense Ministry said another American militant was killed in the same strike alongside al-Awlaki — Samir Khan, a U.S. citizen of Pakistani heritage who produced "Inspire," an English-language al-Qaida Web magazine that spread the word on ways to carry out attacks inside the United States. U.S. officials said they believed Khan was in the convoy carrying al-Awlaki that was struck but that they were still trying to confirm his death. U.S. and Yemeni officials said two other militants were also killed in the strike but did not immediately identify them.

Washington has called al-Qaida in the Arabian Peninsula, as the branch in Yemen is called, the most direct threat to the United States after it plotted that attack and a foiled attempt to mail explosives to synagogues in Chicago.

Good. A traitor who was a key enemy operator and recruiter gets his due on the global battlefield and we get a traitor enemy propagandist as a bonus. Hey! That’s like a ‘50% off all Terrorists’ sale! Yea!
Go Modernity! Boo Dark Ages!

Johnson is one of those ‘Republicans’ who are more correctly described as ‘Business -Friendly libertarians’. Think ‘Ron Paul’… only more self absorbed and insufferable.

Graphic based on October 2008 AP File Photo/Muhammad ud-Deen)
Posted by SMSgt Mac at 14:30