Updated (27 Mar 11) and Bumped (and painfully ... Blogger is acting up)
NEW:
Ares Blog has info pretty much confirming the DEW Line story, and the comments are full of precious moments (Hat Tip: SNAFU! ) .
ORIGINAL:
At Steve Trimble's DEW Line Blog this morning there was a link to a blurb on all F-35s are cleared for flight again. the link took you to a 'page does not exist' response. This evening, the link was still there but still takes you to the 'missing link' bin. 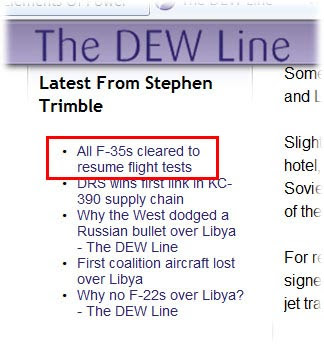 I first saw it this AM and the story had been picked up by several people's twitter et al feeds, but they all just linked to same missing story, except one mention on F-16.net's forum boards: [Posted Mar 23, 2011 - 02:41 PM]

Five Lockheed Martin F-35s have been cleared to resume flying after being grounded for two weeks because of an in-flight generator failure on 9 March. The clearance means that all 12 flying F-35s, including 10 flight test and two production models, have returned to flight status, with seven aircraft already flying since 16 March. A root-cause investigation revealed the cause of the power outage involved a maintenance mistake, programme officials say. Too much oil was poured into the generator system, causing the oil to overheat and shut down the power system, Lockheed says. As a "more-electric aircraft", the F-35 relies on two engine starter-generators to power not only the avionics and sensors, but also the flight controls instead of a hydraulics system. Identifying the cause as a maintenance error means the design of one of the F-35's most critical flight-safety components is not in question. Programme officials do not expect the two-week grounding of five aircraft, including three test models, to have an impact on the overall flight test schedule. Lockheed has committed to complete 872 flight tests this year, more than double last year's total of 410 flights. The failure occurred onboard the conventional take-off and landing (CTOL) AF-4 test aircraft, which is among five models in the test fleet equipped with a new version of the starter-generator. Those five aircraft remained grounded after 16 March while the root-cause investigation continues.


If 'true' this IS interesting

So all of this round of hyperventilating over the F-35 by the 'haters' boils down to a maintenance error? Earlier references to this incident being related to a 'design artifact' of the newer generators on the later aircraft (remember the 7 early aircraft were cleared for flight almost immediately) makes me wonder if the 'error' was due to the fact that the new system has a lower oil capacity?

In any case, it seems to reinforce the assertion that the purpose of 'test' is to learn about problems or potential problems, and since we have humans involved, those problems can come from just about anywhere. Also interesting is that the story appears to have been pulled. Perhaps for further 'development'? Or was it not corroborated/verified yet? Or probably its just a broken link?

No doubt there will be some who will still put a more negative spin on this even if it is true and it sounds like the system redundancy worked as designed. People will b*** about anything: from it "should never have happened in the first place" to "the pilot should have known/realized sooner" to "it took you how long to figure out how something as simple as this was the problem?".

In this case, since the aircraft made it back to the nest safely, this can only be viewed as a 'failure' if we didn't discover something new about the aircraft or we don't have any idea how to make sure it doesn't happen again.
Posted by SMSgt Mac at 15:30

Seeing as how the only comment is spam, I'll toggle LURK into official mode and say I always appreciate your F-35 posts. As you've observed, most of the forums are full of uneducated people who know just enough about the topic to be snarky but not enough to realize how ignorant they still are. Your POV is badly needed and the forums you wade through are a better place for it.

Thanks for the input. I actually visited the 'painter' site and couldn't really rule it out as legit or foul. the comment was innocuous enough, and I assumed at worst he was link-wh***ing. Based on your external observation and perception, I'm dumping it. Thanks again - Keep on Lurking!