OR...
“How America’s first Black Four-Star General almost stopped the current Libyan regime in its infancy 42 years ago but you’d never know of it or any other of his major military accomplishments by his official Air Force Biography"


On Oct. 18, 1969, just six weeks after Col. Muammar Gadhafi of the Libyan Army had led a coup deposing Libya’s King Idris, he stood at the gates of Wheelus Air Force Base. Facing him was an American officer, also a colonel, named Daniel “Chappie” James Jr. However, any similarity between the two men ended with their military rank. Before the coup, 27-year old Gadhafi had been a mere lieutenant in the Libyan Army. As leader and chairman of the Revolutionary Command Council, Gadhafi was catapulted to Colonel overnight. In contrast, James, an African-American officer, earned his rank the hard way by overcoming racial prejudices and enduring air battles in Korea and Vietnam.

Few Americans recall the day that James faced down Gadhafi. The confrontation occurred when Gadhafi ordered a column of Libyan half-tracks onto Wheelus. The half-tracks blew past the gate guards and through the housing area at top speed.

When James was notified of the intrusion, he came immediately to the front gate and lowered the barrier to prevent more vehicles from entering. Standing a few yards beyond the barrier was Gadhafi with his hand resting on the butt of his pistol. James glared at him, his own .45 ready at his side.

"Move your hand away from that gun", James ordered. Much to everyone’s surprise, Gadhafi complied and probably prevented an early end to his dictatorship. As James later recalled, “If he had pulled that gun, it never would have cleared his holster". As if to punctuate the impression James had made, the Libyan Army didn’t send any more half-tracks after that incident.

The article also recounted an earlier “Colonel James vs. the Libyans” incident:


In July 1969, while James was at Wheelus AFB, he displayed an example of his diplomatic talents.
America’s relations with Libya had continued to slide downhill as Gadhafi pressured the U. S. Government to withdraw its military presence. But the Libyans wanted the Americans to leave behind expensive technical equipment to keep the base running. The Americans resisted and planned to remove the material from the base. A serious confrontation almost took place when several Libyan colonels demanded an audience with James.
James invited the officers to his home to discuss the issue of the base equipment. Tensions were already high as the Libyans entered James living room. As the Libyan officers sat down, their driver entered the room carrying a submachine gun. James immediately glowered at the Libyan officers.
“I’m going to count to three”, he said, “and if that man is not out of my living room by that time, I will physically throw him out”. The driver made a hasty retreat.

You’ve probably never heard of these anecdotes because of all the ‘politically correct’ framing of his illustrious career, including that which can still be found in his 32-year old Air Force Biography (last updated shortly after the General’s death a month after he retired).

Unlike every other AF senior military leader biography I’ve read, Gen James’ bio does not list his major military awards and decorations. The biography has literally paragraphs of the General’s civilian awards and honors received. Then it simply closes with the statement: “General James is a command pilot. He has received numerous military decorations and awards.” 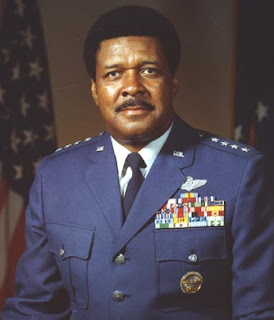 General Daniel 'Chappie' James
(AF Official Photo)
If you can’t decode the ‘fruit salad’ on the General’s chest in the official photo, you would never know what those military awards or decorations were. As it is, I can’t even tell with 100% certainty if some of the General’s oak leaf clusters are silver or bronze (For civilians: ‘silver’ indicates 5 separate additional awards of the medal or ribbon and ‘bronze’ represents 1 additional award). 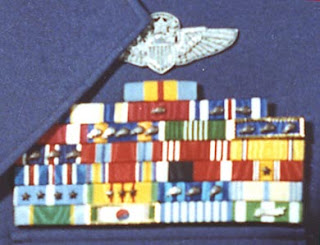 The ribbons and devices below the General’s Command Pilot Wings represent the award of (from top to bottom and left to right):

Why am I making ‘a big deal’ out of this? It is a MILITARY biography. While one can argue for inclusion of the things the General was an important part of other than his awards and decorations, especially concerning his role in breaking down barriers within the Air Force and the United States, one cannot argue for the dearth of references to his actual military achievements in the bio.

This absence of General James’ military accomplishments led me to search for a biography that might tell me what at least some of them were and what they were for. I haven’t found one online yet (I have found some books I’ll keep an eye out for), but my search took me to the interesting bits above. Incidents that are quite relevant today, given the current ‘kinetic military action’ in Libya. James’ encounters with ‘Ghadafi’ and Co. speaks volumes about a tyrant’s cowardice and a General’s courage.
The Air Force needs to clean up General James’ biography to include a description of his military awards and decorations. He was an American Fighting Man: he deserves to be remembered as more than a civil rights ‘symbol’ in the abstract. For what is it he exactly symbolic of without acknowledging his actual military accomplishments?
Posted by SMSgt Mac at 22:00

Here's another piece of PC you'll never hear about. When General James was the deputy commander for operations with the 8th TFW he worked very well with the then wing command Col Robin Olds. The two got the nickname: "Blackman and Robin".