From a comment in a recent thread at DoD Buzz:


….The one thing stealth did not do is make speed less valuable in air warfare. It is unfortunate that we've forgotten the lesson "speed is life" in the interest of making aircraft stealthy. The SR-71 combined a limited degree of signature reduction with high speed and would still be difficult if not impossible for most countries in the world -- including the Russians and Chinese -- to shoot down. Even missiles that fly faster than the SR-71 cannot sustain those speeds for a long enough time to hit that airplane regardless of whether they carry their oxidizer on board or get it from the air around them….

"Speed is Life” is an Enduring Myth.
I will provide evidence that ‘Speed is Life’ is ‘no more’. I provide only evidence (vs. ‘overwhelming’ evidence) because I will not go anywhere near where I cannot go in public forums. (As an aside, there is also just so much ‘wrong’ with the above assessment of the SR-71’s hypothetical performance against modern systems that we’ll just note here that the statement presumes a ‘late’ acquisition and a ‘tail chase’ and falls apart on that presumption alone.)

NOTE: This is not to pick on the commenter who made the above assertions – I’ve heard similar from professionals who really should have known better. Myths die hard.

“Speed is Life” is an example of an air combat concept that has outlived its status as a ‘maxim’ and should be modified to read accurately today as: “Speed is Life… to a limited extent…maybe…sometimes”. More often than not, against an integrated air defense system in today’s battlespace, a truer statement would be: “Go Faster – Die Sooner”.

To support my assertion that in effect ‘Speed Kills’ the following are releasable excerpts from a study (disclosure: mine, written in 2000 and updated in 2009) that included observations concerning the Aeronautical Systems 1999 ‘study’ “System and Operational Implications for Choosing Best Speed for Global Missions” (aka ‘Speed Study’ or ‘ASC Study’) and the treatment of ‘speed’ vs. ‘survivability’ in other publications as well.


….. The ‘weaponization’ section of the ASC Study report reviewed the study’s exploration of the interrelationship between aircraft speed, altitude, and the ability of a very fast platform to attack using large standoff launch distances from a target. The report includes the observation that the survivability of the weapons, like the candidate platforms, would be based upon a best-value combination of factors including speed, altitude, tell-tale signatures maneuverability, and countermeasures. The definition of best value was not included in the report. The report indicates that the study further explored the ramifications of such a launch technique on the standoff weapons’ conceptual designs, noting that a higher kinetic energy delivery could reduce the fuel fraction of powered weapons and allow the weapon to have a larger warhead.

The ASC Study report reiterated that to ensure adequate survivability, all platform concepts studied would rely on the employment of standoff weapons to keep away from dense threat areas during the initial phases of an air campaign until other assets could be brought into theater for support, and presented a chart (p. 58) showing the relative glide weapon ranges when launched from aircraft flying at various speeds and altitudes. It is worth noting that while large launch distances from the target can be achieved, for the various concepts, it is seen that all launch platform concepts close the gap between the threat area and their position significantly after launch. It should be noted that it also appears from the study data that the faster the platform speed, the greater the post-launch closure to the target and threat area. A theoretical example of this dynamic is illustrated in Figure 9. 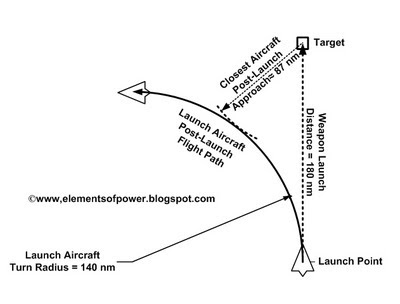 
Figure 9 illustrates estimates and profiles provided in the report for a Mach 4 launch of a glide weapon. This specific example presents the geometry of launching a weapon from approximately 180 nm away from a target to deliver the weapon with a .85 Mach impact speed on the target. Using the Gravity-load (G-load) factor provided by the study report for a practical operational turn, the launch aircraft would approach within approximately 87 nautical miles of the target after the launch in executing a turn away from the target. The launch aircraft closes to less than half the original launch distance after weapon separation. A thorough examination of the synergy that comes from combining standoff weapons and stealth is available (Paterson 1999), illustrating how the combination of stealth and standoff weapons delivered using conventional launch techniques becomes a significant contributor to survivability. However, it cannot be determined from the ASC report if the net impact of the post-launch closure at stand-off ranges using higher kinetic launch events was considered or factored into the ASC study’s kinetic delivery survivability assertions. If the candidate platforms were maneuvered in a manner that exploited the modicum of reduced signature reduction they were assumed to employ, then performing turns at even smaller bank angles would generate even larger turn radii, and the post-launch flight path of the aircraft would bring it even closer to the target and perceived threat, further minimizing the advantage of kinetic standoff attack….

In the conduct of this study, a need for a better understanding of the relationship between aircraft speed, observability, and survivability in a complex threat environment became apparent. In one of the earliest published discussions on low observability and survivability, it was noted that aircraft flying “at the greatest speeds possible in high threat areas minimizes time at risk” (Paterson, 1997, p. 10). A similar point was made in the 2006 Committee’s report ‘Future Air Force Needs for Survivability’:

While the relationship of speed and observability is elaborated upon and clarified within the 2006 Committee’s report, the 2006 Committee statement as it stands is incorrect and misleading. The quote is only accurate if the quality of the exposure time is equivalent. As noted by Grant (2001), the F-117s in Operation Allied Force had difficulty in maneuvering within the confined airspace over Serbia and Kosovo to attack targets and managing their signature profiles. When discussing transiting high threat environments at the greatest speeds possible, this must include provisions for management of the penetrating aircraft’s signature in doing so. The faster the aircraft is moving through the threat environment, the more difficult it is to manage its signature. The probability of the faster systems being able to equally manage their flight profiles and in turn equally managing their signatures as well as slower systems in a high threat environment can be shown to be comparatively low. This is easily demonstrated using a variation of Figure 9’s Mach 4 scenario that was presented earlier. In Figure 19 below, time has been substituted for distances, and the target is now a threat. 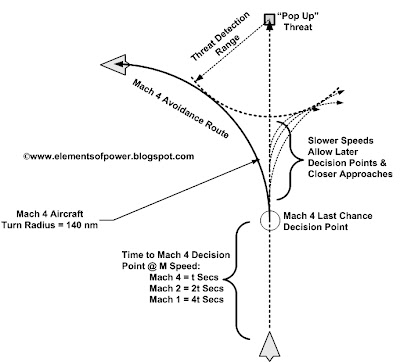 The implication here is that in negotiating a dense threat environment a high speed transit can reduce the time within a threat engagement zone, but increases the probability of entering an engagement zone in the first place. The reduced reaction time and increased turn radius of the high speed aircraft has negative ramifications in planning and negotiating a mission route through a dense threat environment. Thus any discussion of speed as a benefit to survivability must include the quality of the relative low observability and difficulties in executing a transit of a dense threat area at higher speeds.

Post Script (a gentle reminder): The very definition of ‘Stealth’ is Very Low Observables (VLO) AND Tactics. “VLO” is highly ‘reduced’ radar (RCS), IR (Radiant Intensity), visual (Contrast, Area), acoustic (Sound Pressure) and EME (Electromagnetic Emissions) signatures. VLO designs are tailored to balance those signatures based upon mission and threats. ‘Tactics’ are maneuvering, mission planning/routing, selected sensor operational techniques, and weapons application techniques. Tactics are applied to maximize the advantages of the tailored VLO design. If anyone makes any claims about ‘Stealth’ outside of, or ignoring its definition in toto, they haven’t got a clue.

External refs used in the above excerpts:

Paterson, J. (1999). Survivability benefits from the use of standoff weapons by stealth aircraft, AIAA.
Posted by SMSgt Mac at 14:51

Thank you. Your comment is so general however, it has to be considered as possible spam. Please give me an idea of what you enjoyed in the post in the next couple of days, else I will have to delete your comment as a precaution.

I understand your point at the operational level - route planning, weapons parameters, and the like - but isn't speed still important at the lower tactical level? If your stealth fails or is compromised, you still need that maneuvering energy to defeat a launch kinematically.

I'm not certain I understand the question exactly, so if I swing and miss feel free to rephrase. I think what you are really asking about is the 'end game' and utility of 'stealth' vs. 'speed' (momentarily treating smash as a non-tactic sub-element of 'stealth'). There may be a time when you might wish you had that one extra knot, and there is of course a minimum V for any situation. But there is no absolute advantage in going faster either for maneuverability or survivability. there are a couple of problems with the hypothetical "If your stealth fails or is compromised, you still need that maneuvering energy to defeat a launch kinematically" unless we narrow the situation considerably. First we have to accept the probability that 'stealth' failed to the point that it was not effective against all the parts of the kill chain to the point that the failure allowed the aircraft to be 1) detected 2) tracked long enough for a decision to be made to 3)fire at it and 4) the weapon to perform the flyout to it to be in position in the first place to bring maneuverability into the equation. Now the question becomes (assuming our active countermeasures are ineffective by themselves) do we have enough maneuverability (of which V is only a component) to get out of the way of the oncoming weapon? You can still make working the V differential for you by being able to climb/turn more quickly and evade the oncoming system. This has been the favorite method for dodging SAMs since Vietnam. If the system is proximity-fuzed, then your 'LO' would also have to be compromised gainst it as well for even a 'close-enough' hit.
The value of LO is that it breaks or disrupts the kill chain at every link, and it is really a system of systems not prone to catastrophic failure (see gentle reminder above).