I'm back home (as of 00:30 hrs) Thursday from a business trip. Blog-wise, my immediate aspirations are to try to 1) ferret out the real Next Gen "Semi"-Long Range Strike story and 2) close out a substantial CAS Mythology post in my little 'spare' time.

BUT! since someone 'asked' for a comment on the latest "F-35 is Evil" drumbeat (especially one so loaded with snarky false confidence) and it is such an easy request to fulfill....I figure, eh-why not?

Latest 'Isn't This Just Awful' F-35 scare headline from Flight Global: "Lockheed adds $771 million to early F-35 production bills."  I suspect Steve Trimble might not have written the original headline, but if he did.... 'meh'. Headlines, if done properly, should draw the reader in. If the story is boring, it is not unheard of to have the 'zing' come from careful phrasing of both headline and story. Such careful delivery allows interested and targeted readers to overwrite their own bias and beliefs into the piece.
This headline gets transformed into the less accurate: "Early F-35 costs increase $771M, Lockheed says" at DoD Buzz.


The $771 million reflects the impact of the 2004 weight reduction redesign on the Lockheed’s production system, the company said. The redesign carved off thousands of pounds of excess weight, but suppliers could not keep up with the flow of design changes. That led to late delivery of parts, then extra labour hours to install them outside of the normal manufacturing sequence, the company said.
As the F-35 continues to be developed even as the first production models are delivered, the $771 million bill also includes the cost of future modifications to make the aircraft standard with jets delivered after the development phase ends in 2016.
It is possible that the bill for LRIPs 1–3 could be reduced in the future. “The F-35 team is focused now on any opportunity to reduce the concurrency estimate and improve the final cost-to-complete on these early production lots,” Lockheed said.

Ahhh....so the cost of the 'production system' weight-reduction redesign, for building all three variants in the entire fleet built between then and the last F-35 to be delivered someday probably decades from now , as well as its impact on the aircraft built during the weight reduction redesign effort, is 'billed' in the present time, and this 'bill'  might even be reduced in the future, since it assumes future costs included in the 'bill' as well?

At the end of the DoD Buzz article, the fever swamp known as the 'comments section' does its usual 'kill the witch' thing until a commenter "Another Guest"  tries to inject a little sanity:


I'm sure an Australian, other fighter manufacturer marketing rep, or nauseus dog will try to correct this uninterested observation. Trimble's article implies these costs were related to 2004 weight reductions to meet F-35B STOVL requirements by shaving weight off parts common to all variants and unique to the Marine model.
An assumption then follows that this is a one-time expense...caused by the Marine requirement that no other aircraft can duplicate. It constitutes one quarter of one percent of total program costs while ensuring better performance of all aircraft types to include decreased fuel consumption that may retrieve some of the cost.
From LRIP 5 on, LockMart will assume more, if not all over and above costs. BTW, a Gripen/Raptor/F-15SE (or F-16, F/A-18) mix would be nowhere near as effective with most aircraft obsolete against future threats at far higher acquisit[i]on costs than Tee claims. Seen any F-22s flying lately, bombing Libya or Afghanistan, being sold to allies, or replacing Naval service aircraft?

Well said.  Of course now the denizens of the fever swamp are furiously trying to 'down-rate' his comment, as if that means anything. But let us look at the hard numbers behind 'Another Guest's cogent observation on the costs involved in this 'bill'. 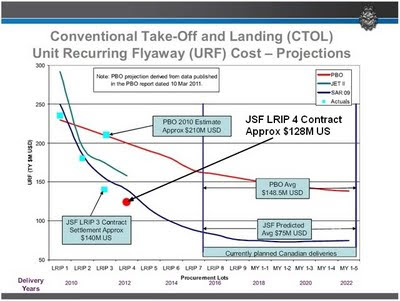 Extract from a Canadian briefing on the F-35 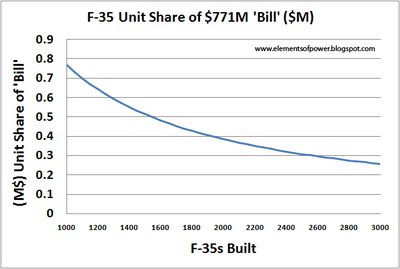 How the $771M 'Bill' breaks down over the whole program
From these two charts we can readily see that even with a massively reduced F-35 buy, the 'cost' of the weight reduction re-engineering amortized over the number of units built comes under a piddling $1M/unit. In any case the end cost is still far, far, (millions $ for the A model, and I would guess similarly for the B and C) below the unit cost difference between 'actuals' and internal estimates.

In short: Add the cost of the weight reduction and to-date you are still delivering aircraft well under internal cost estimates on the curve and those costs are trending orders of magnitude lower than the bulls*** CAPE estimates.

Thus we now understand what the 'bill' is.

What is a cynic? A man who knows the price of everything and the value of nothing.

--Oscar Wilde
What did we as taxpayers get in return (Besides ensuring an 'executable' STOVL version)? We could do an analysis of the design changes to see where lower weights translate into lower stress and wear and tear and in turn higher reliability and fewer failures and balance that against the ledger where reduced weight may have increased probability of failure or loss, but we don't have sufficient data. I would suspect the balance is positive in 'reliability', but cannot prove it. All I do know is that the entire program is being managed to constrain Total Life Cycle Costs.

What we CAN easily perceive is that since the airplanes weigh 'thousands' of pounds less at the lighter weights, the fleet will almost certainly burn BILLIONS of Dollars LESS fuel over the operational life of the fleet. A common aircraft design rule of thumb that shakes out from the Breguet range equation is that for every 1.00% of aircraft weight removed, ~0.75% less fuel is required.  3000 aircraft, 8000 hr operational life, SFC ~.7 as basis for fuel consumption......do the math.

BTW...
The 'McCain' angle is just a red herring. McCain is (still) just a self-aggrandizing, hot-headed a**hat. What else would anyone expect from him?

Hat tip Solomon at SNAFU: Heh. Bill Sweetman 'double-downs' on the topic. I should have used the words 'Anti-JSF drumbeat' more. Honestly, what brand of stupid do you have to sniff to try to amortize the total 'bill' for re-engineering production capability for the entire fleet against just the first 31 aircraft?   Whomp, Whomp, Whomp.
Posted by SMSgt Mac at 16:48