Going through the web looking for planes I flew on, tested, or supported-- and C-130B S/N 57-0526 at the Hill AFB Museum came up on the search engine. 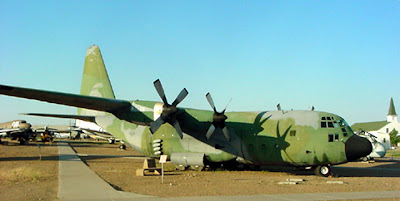 I have mixed feelings about this bird, which had a pretty unusual history-- even before my unit flew it. On the one hand, over the years it always got us home. On the other hand, I’m lucky it didn’t kill me and the rest of the crew in the end. I flew on the last test missions the bird ever flew, and then we flew it back to Hill AFB from Edwards AFB. After we brought it home it went into heavy depot maintenance. It never really came out, though it took a while for the powers that be to decide to pull it from service permanently.
We took the plane to Eddy because we had done yet another modification to the plane and successful Performance and Flying Quality (P&FQ) testing was necessary before we would be allowed to use it under anything but the most benign flight conditions. I was Safety Observer and Flight Test Engineer in the 'backend'. My palletized crew station was positioned at the left paratroop door where I would have an unobstructed view of the ‘tufted’ shape we had hanging on an outer pylon, normally used to launch ‘stuff’. There was also a very large turret-shaped blister that was to be a camera fairing installed above and behind my station. My job was to run the backend test cards and observe and note the tuft behaviors as well as any unusual buffeting or other evidence of turbulent flows at all the different test points. I seem to remember two days of preparation and one very long flying day to hit all our test points. The reason we had to go to Eddy is that was where the Pacer aircraft were (A-37 on this mission). It was supposedly less hassle for us to go down to the Flight Test Center and coordinate use of the Pacers and crews than vice versa.
The ‘downside of this arrangement was that our (the 6510th) Wing Commander required us to use a local (Eddy) Test Pilot instead of one of our own on the reasoning that the local pilot would be most familiar with the local airspace, The fact that our test pilots flew down to Edwards (our parent organization) nearly every week seemed to escape the logic of the Wing King. The day of the mission we flew innumerable "Tower Fly Bys" (No top Gun BS: just like this video only slower and tighter) at different airspeeds while cinetheodolites tracked us on the ground, then we moved to higher altitudes for the ‘fun’ stuff. At varying airspeeds we followed the test card that took us through (among other things) Max Q rudder kicks, and other maximum control deflections to test the effect of the stability of the aircraft with those new large and unusual shapes glommed on to the left side. I dutifully recorded my observations (which probably helped me from getting airsick) throughout the mission. The rest of the backend of the C-130 was empty, as the Loadmaster had the good sense to sit up on the flight deck during most of the gyrating. As my station was just in front of the ramp, I was getting wild rides left and right and up and down as the pilot intentionally tried to add in energy and make the deviations as wide as possible before releasing the controls and observe the natural damping effects of the design return the plane to a stable flight condition. So far, it was a pretty long and boring mission.
We returned to base, and when we entered the pattern, I could see the B-2 (in those days it was deep in flight test) beginning to move out onto the taxiway from its South Base facilities. Our ‘local’ test pilot landed a little longer than he wanted to, but no problem right? Heck, Edwards has one of the longest paved runways in the world! Except this runway was only as long as the turnoff the local Golden Arm wanted to make, and he leaned on the brakes- Hard. I’m on headset of course, and all I hear in short succession is our Pilot calling our ‘Easy!’, then ‘Load!’ The Loadmaster immediately chimes back “I’m on it”. He swings down off the flight deck and checks the inside of each wheel well using his gloved hand pressing against each side. The Load looks at me shaking his head and tells the flight deck. “Yeah we've got hot brakes”.
The pilot informs the tower and then we sit and wait right where we are lest a fire breaks out. We have to wait for enough time to pass to be safe enough for the Fire Crews who come up to clear us for a taxi in. The B-2 in the meantime, turns around and goes right back to South Base because its mucho-expensive range-time window will close before he will get there. We eventually taxi in and are ‘welcomed’ by our superiors with the question: “How in the hell does a C-130 get hot brakes on a 15000 foot runway?” The ‘local boy’ has to do the Mea Culpa.
We blast out for home later (I think it was the next day), and the next week C-130B 57-0526 goes into the depot, conveniently for us right there at Hill (Depot was moved from Kelly to Hill during the early BRAC rounds). I don’t think the plane was even finished in the teardown during the next week when we get word that the plane will never fly again for fear that the entire tail will fall off. There was "massive" hidden corrosion all around the bulkhead immediately aft of the paratroop doors (where my crew station was and where the ramp attaches). They told us it is the most severe case that had ever been seen. And I got to spend the week before as part of a crew trying to make it come apart.
Lucky.
Posted by SMSgt Mac at 22:25