H/T Solomon at SNAFU! for first pointing these out. 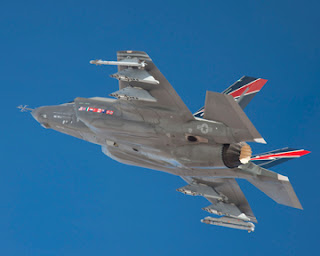 High resolutions pics available at ARES blog, but I believe (just an opinion here) ARES was more concerned with getting out the pics than getting the details down. The ARES article mentions:


It's not too evident on these images, but the AIM-9X pylons have an unusual outward kick that mounts the launch rail at an angle to the pylon, presumably to provide adequate clearance from neighboring stores.

That could be part of it, but since we're speculating, I think a major reason might have  more to do with the proximity of the AIM-9X (or other store) to the Flaperon edges. 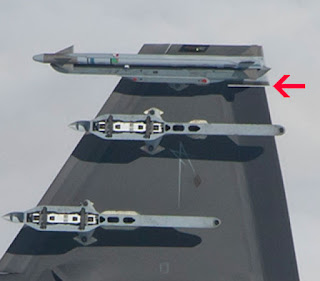 Even if there wasn't a physical clearance problem, there might have been potential for some interesting acoustic environments generated locally. You could have the weapon causing buffet of the wing and flaperon or vice versa - maybe even affecting weapon release envelopes.
Who knows? It could even have a signature benefit from the side (I doubt it though).
I held off mentioning this because I was certain one of the local 'experts' at Ares would have caught the missile/control surface proximity, but it's 40 comments in and 'no joy'. Maybe they're focusing too much on 'clever' and not enough on 'smart'. Heck, ol' Bill even dumps on a commenter positing the possibility of multiple AMRAAMS on some of the pylons (possible if not practical or desirable) with a crack about the commenter forgetting the 'nuclear laser' option.
The pylons proximity to the flaperons does seem to have raised some (ahem) 'concern' in the comments. 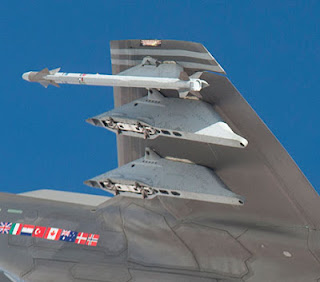 While they appear to be longer (vertically) than the F-18 E/F's (excellent pics here), they also appear to be more streamlined than the F-18E/F pylons. The two inboard pylons appear identical, and such interchangeability would be a logistical advantage over many previous aircraft (like the F-18E/F). I suspect the F-35's pylons are lower drag installation than the F-18's because they look 'cleaner', but couldn't prove it either way without some design data.

Update 21Feb @2020Hrs.
I stopped by ARES again to see if anyone had picked up on the proximity of the flaperon edges to the outboard store station and didn't see anything related. I did notice that Ol' Bill must have inflamed the commenter he 'snarked' because the guy's first comment afterwards was deleted and he's on a tear about it. The other thing I noticed was someone with the handle of 'RAF' seems to REALLY want there to have been a decrement to the A/C model performance due to commonality with the B, and he works hard at selling the idea of the B's alleged 'optimization' for STOVL simply MUST have subverted the rest of the variants.

People evidently don't read any more, for as I noted at SNAFU! a while back in the comments:

From AIAA paper "The Genesis of the F-35 Joint Strike Fighter" by Paul Bevilaqua:


This first-order analysis suggested that it might be possible to almost double the thrust of an existing F-119 engine with a dualcycle shaft-driven lift fan the same diameter as the engine. Such a variable-cycle propulsion system would provide high levels of thrust augmentation in the STOVL mode, with a cool low-pressure footprint, ample control power, and minimal effect on the design of the airframe. By placing the lift fan in line with the cruise engine, the bypass ratio would be increased without increasing the engine diameter. And because the cruise engine can be optimized for conventional flight, its performance is not penalized for its STOVL capability.

Everyone doesn't have access to AIAA archives, but everyone on the web should know what a frickin' search engine looks like. Bevilaqua also notes in more than one of his AIAA papers that the mid-mission CG of the B model is effectively the same as the A model. This is a critical point because one seeks to design the aircraft to have the best mass properties for maneuvering at mid-mission weights because that is the time when a combat aircraft needs its best maneuverability.

So what do you think of the B's gun pod? Looks awful chunky to me, but perhaps that's just aesthetics.

Well it is pretty chunky-looking from the LO requirement that's for sure.

I think there is a large faction who knew they'd never get a JSF off the drawing board if it didn't at least have a token gun, and a smaller faction who insisted on a minimal capability. I believe that by ten years from now, people will have figured out you really don't need the gun 99% of the time and the 1% of the time you will, you'll either decide it's not too risky to carry a non-LO pod with more ammo or come up with a higher capacity LO gun pod. There's just so much more you can do with an SDB or other precision weapons, that you don't need the gun nearly as much anymore.

Seems the primary value of a gun may still reside as a backup for missiles in A2A. But i agree, sticking to internal PGMs is preferable.