UPDATED 12 July @ 20:54: Below, I had stated among other things, my problems with the reporting of  'Admiral Greenert 'story' and the rapid mutation of the headline/meme. Late last night, I e-mailed Ms. Mackenzie Eaglen concerning a 'tweet' she subsequently posted and also repeated part of my post concerning the morphing titles. I don't know if my e-mail contributed to bringing about the following, but it is good to know I'm not the only person who provided proper 'feedback'.  The updated Eaglem piece now has this added at the bottom:


[A note of apology from Sydney J. Freedberg Jr., Deputy Editor, AOL Defense: When I first posted this article by Mackenzie Eaglen, I hastily titled it "CNO Ready To Cut Back On F-35 Joint Strike Fighter," which exaggerated Ms. Eaglen's point and misrepresented Adm. Greenert's position. After some sharp feedback from both the CNO's press officer, Capt. Daniel Hernandez, and some of our well-informed readers -- both privately and in the comment section below -- we've decided to correct the title to "CNO Article Raises Doubts About Joint Strike Fighter." The original, incorrect title was entirely of my choosing, and Ms. Eaglen bears no responsibility for it. My apologies to our readers. -- Sydney J. Freedberg Jr.]

Good to know Ms. Eaglen isn't going down the dark side.

There's a delicious serendipity in this, as I'm about to post something else tonight that -- if there were ANY professional standards for ensuring that one got their facts right in 'Journalism'-- should  trigger a retraction from Freedberg on a 'piece' he wrote.
Who knows? Perhaps we can eventually cure Mr Freedman of his Defense 'JournoPunk' tendencies?

This is a weird story so far. To sum up: 1. A ‘Marine Engineer’ cum U-boat driver opines on Low Observables (poorly) in an article that covers a lot of ground titled: “Payloads Over Platforms” using every Comp Sci 101 “Computing Power!” cliché and anecdote amidst a generally clumsy attempt to draw some grand paradigm across ship and aviation weapon system design.
There’s nothing in his resume to indicate he understands how RF and IR systems ‘work’, especially in a combat environment.
1. His ‘stealth’ experience appears to be limited to the “hide until you shoot and hope nobody sees or hears you shoot, because if they do hear you, you are so scr*wed” variety.
2. Among his lesser but more irritating sins, to support his ‘LO is limited’ argument he cites an 11-year-old Popular Science article on Anti-Stealth technology, written by the ‘Ragin Hedge Baby From the Shires” himself–twice (Need I note how badly that article was dismissed by the professionals when it was new?).
3. Said article gets ‘noticed’ (I wonder who in POGO noticed it for him?) by DoD Buzz’ Young Mr. Ewing. A ‘Journalist’. Young Mr. Ewing turns the Admiral’s ranting into an ‘Anti-JSF’ hit piece, creatively titled: “Did CNO just take a big swipe at F-35?”
4. Young Mr. Ewing the Journalist’s article gets noticed by and an even younger and infinitely cuter AEI ‘scholar’ named Eaglen who simply amplifies Ewing’s story line by writing an article titled: “CNO ready to cut back on F-35 Joint Strike Fighter” (and it looks like it was picked up by AOLPOGO).

Will tomorrow bring a “CNO says F-35 is Satan!” headline?

The last step was odd, given AEI’s positions and past articles on defense and air primacy. Methinks Ewing and Eaglen just might know each other, and Eaglen may have just gone off the reservation a bit.

RE: “Low frequency” systems.
Low Frequency systems MAY be good at getting an idea that ‘something is out there’ but not where it is with any precision and certainly not such that an LO system can be effectively “tracked” (much less ‘targeted’-- Do they even teach ‘Kill Chain’ in Sub school?).

RE: Limits of Stealth.
Duh. No Sh*t. They’ve always been there. ‘Stealth technologies’ are designed into systems and applied in ways DETERMINED by the operating environment dictated by the mission requirements.
I am pleased you specified ‘Stealth Technologies’ instead of ‘Stealth’ because in application, Low Observability is a combination of technology and TECHNIQUES. The ‘frequencies’ that low observable weapon systems are tailored for are precisely those that will pose a threat to them. The CONOPS and mission profiles of these weapon systems are designed to minimize exposure of those “angles or aspects” to threat systems.
In short, your two bullet points have always been two of the key considerations of low observability design and quite frankly, you would be a LOT more credible citing Radar Cross Section by Knott, Shaeffer & Tuley, instead of Bill Sweetman (WTF?). At least From Knott et al, you would have learned how RCS objectives are selected, optimized and implemented in LO design. Since the LO engineers are infinitely more knowledgeable on something that they have been allowing for since day one, may I suggest you ask THEM when they think LO will be ‘obsolete’?

RE: ‘Aspects and Angles’ Specifically--A Thought Experiment
You are in Command and in the control center of an Integrated Air Defense System. I am flying along at 450 Kts at 45000 ft in my Acme Stealth Bomber. At point X and Time T, one of my ‘angles’ and/or ‘aspects’ is aligned such that my signature is detectable by one of your ‘sensor systems’.
At time T plus 1 microsecond later, that ‘angle’ and/or ‘aspect’ is no longer aligned such that it can be detected. DID your system detect me in the first place? If it did, what useful information did you collect to even process as to my range, altitude heading, and speed? (Hint: Probably Zilch, Nil, Nada.)
Did I mention that the RCS signal return you were able to detect was the equivalent of a large insect? How many large insects, or birds, bats, chunks of vegetable matter are flying through your network at any given time? Know anything about ambient RF noise? What are the chances your system filters out that 1 microsecond of signal as random noise? (Hint: Pretty Frickin' High - all the processing power in the world doesn't help you if you are integrating a Zero) My RF ‘fuzzball’, in all frequencies where the physics dictate I can be tracked, is defined by very narrow spikes and very deep nulls. My three-dimensional orientation to any and all of your sensors is changing constantly and rapidly-- even if I fly in a straight line, constant speed and elevation.
Oh, did I mention my tiny signal was received among all the other combat environment RF activity... including my onboard EW and offboard jammer support?
BTW: Did I mention this is ‘day one’ and your radars and control nodes are the primary targets? 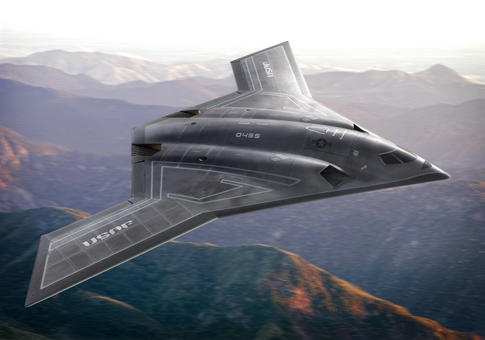 Normally, Navy CNO’s don’t openly demonstrate their ignorance. This guy is shaping up to be ‘entertaining’.
Posted by SMSgt Mac at 21:30

Thanks,
The really tasty part is that Ewing in his fetish for seeing all things as negatives for the F-35 is missing where the Admiral was really heading: trying to punch up the offensive capabilities of surface/sub systems as 'the future'. The piece he wrote practically dripped Arsenal Ship/Sub (not a bad idea in moderation).
He'll learn.