I have no real time to do any substantive postings right now, and I want to get back to the '20 questions series' in that regard before I move onto other topics. But I could not let this anniversary pass without a nod to what may have been my biggest contribution to National Defense (six years after retiring from the AF) at that time.

I'm the guy who told the Air Force in 1998 that unless the missions are too long for the aircrews, they shouldn't bother to forward deploy: They could do more operating from home station. The B-2 was getting beat up (wrongfully--sound familiar?) for not being 'deployable'.  The program SPO came to my 'shop' and contracted us to accurately describe where any shortfalls were and recommend corrective action. The first question in answering that question is: "Under what circumstances will it make sense for the B-2 deploy instead of operate from Whiteman AFB?" the second question was "When it does deploy, where should it deploy to?" The analysis showed a clear answer to both questions: deploy rarely and only a handful of locations would provide coverage for the entire globe.


Deployment is Hard Work for Not a Whole Lot More Return

Because when units deploy, it looked like it took at least a week to get packed up, move, get set up and start forward operations. The B-2s in most circumstances spend that week getting a head start (in servicing aim points) on any other system that has to deploy, and the B-2 and B-1 experiences in Allied Force actually played out to prove that assumption. Once a system is forward deployed, the logistics of feeding fuel, munitions and everything else is tougher than the logistics of doing same at home base. I had modeled that even if the forward deployed system was able to adequately generate sorties for all their airplanes 'faster' (because they were closer) that for a six bomber package, all the unit at home station had to do was add one aircraft at home station (easily done) to surpass the deployed sortie rates.


The News Was Well Accepted

When I briefed  my findings to the 509th at Whiteman in the summer of 1998, I had one maintenance officer tell me after the brief that when a package forward deploys, the first airplane that breaks hard usually becomes the forward deployed parts bin and 'hangar queen'. They probably wouldn't even need to add a plane at home station to equal the 'forward-deployed" effort.
One of the positive developments that came out of the effort before Allied Force was that the Air Force decided to get off the dime and start setting up, at key FOBs, the portable shelters they had been developing. By the time Allied Force kicked off, there was significant movement in that area which would pay off not very much later in Operations Enduring and Iraqi Freedom (another war story).

To commemorate the anniversary the B-2's successful combat debut, here are a few slides extracted from a General Hawley brief. I got my hands on it in early 2000, but it was probably one of the last big presentations the General made before retiring in mid-1999.

Leading up to Operation Allied Force... 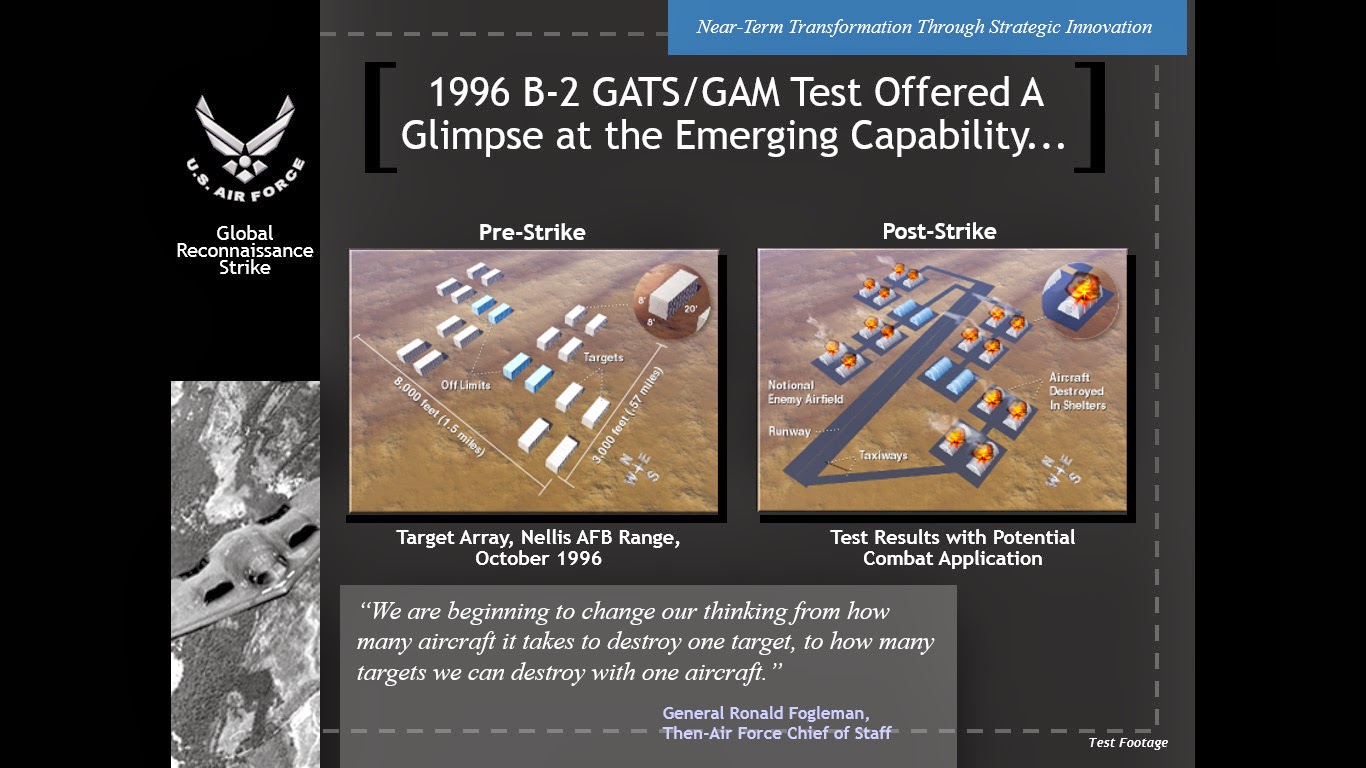 I'm imagining a future where US Navy JSF and Growler pilots fly towards an enemy IADS hidden inside a cloud of MALD and JASSM-ER launched from USAF bombers. With an IIR terminal seeker head and a planned in-flight retargetting capability on the JASSM-ER, the fighters should be able to send some of the missiles after any IADS asset that they detect. A strike package of a dozen each Buffs and Bones can haul 192 MALD and 432 JASSM-ER. The F-35s would be loaded up with AMRAAMs and the Growlers would carry their EW gear and AARGMs for disabling key IADS emitters.

I'm quite curious about your modeling efforts. Are there formal modeling tools that you employed?

Hi Marauder. I'll give you the full answer when I whip a Trojan on my laptop, but the answer is yes and no. I relied heavily on actual B-2 data run through the DoD LCOM model to predict component failure rates based on sortie times, and for unscheduled maintenance times based on failure modes and associated repair times. This was used with some home grown probabilistic and sortie duration models to produce sortie generation rates at any operating location.

Thanks for the reply; Looking forward to the full answer. I'm wondering how BDA figures into the sortie generation rate. Some of recent speculation about the "Mystery Aircraft" sighted over Texas centered on the B-2's lack of onboard EO systems that could perform BDA.