As my few readers who are not my friends may have deduced, I haven’t been blogging much lately because it is done in my ‘free’ time and I don’t have much of that these days. But I wanted to pass along my experience from two weekends ago at the University of North Texas (UNT).

I attended UNT's Military History Center’s 25th Hurley Military History Seminar on October 13th and it was a day very well spent. The more than 250 attendees were a pretty interesting cross-section of academics from UNT and elsewhere, North Texas (Including the Dallas-Fort Worth area) civic and business leaders, and current and past leaders of many veteran groups. Attendance was by ‘invitation only’ and I can’t thank Dr. (BGen) Hurley enough for being kind enough to put my name on the list.

I originally inquired about attending the event because I very much wanted to hear the first lecturer, Dr. Victor Davis Hanson speak. I’ve read most of his books on the ancient Greeks and warfare, have listened to or viewed many of the media events in which he’s appeared, and own a fairly extensive collection of audio files containing his lectures and debates over the years. I believed (correctly as it turned out) that I already knew much of what he was going to say on the subject of "The Significance of Ancient Warfare for the Present and the Future", but I also knew he had just returned from Iraq and was very interested in both what he might tell us about his experience and what others might ask him in the Q and A portion of the program.

The second lecturer was (for me) an additional and unexpected treat. I found out a week before the seminar that it actually was a seminar and not just a lecture by Dr. Hanson, and that there would be an afternoon session with Dr. Thomas A. Keaney (“The Future of Warfare: Politics and Technology”) of Johns Hopkins University (and former BUFF driver). Initially, his name seemed vaguely familiar and I’m embarrassed to say that at first I didn’t recognize exactly who he was. I asked a colleague in the D.C. area if he knew anything about Dr. Keaney, and he responded with a reminder that Dr. Keaney was the co-author of the “Gulf War Airpower Survey” which is, as my colleague reminded me, “possibly the finest account of an air campaign ever put together”. My embarrassment comes from the fact that I had used Dr. Keaney’s work as a key source document for modeling force employment scenarios for several different analyses in my last position, as well as a key reference in my grad school capstone project. I chalk the lapse up to the anonymity of government work and the fact that you never appreciate what you get for free. I’m certain I would have remembered the name if I would have paid for the reference. 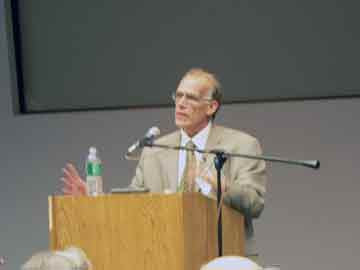 Dr Hanson, as I mentioned earlier really didn’t present anything in the lecture portion of his session that I hadn’t heard before, but it is always wonderful to listen to someone speak extemporaneously on a subject so completely within his grasp and command. History departments on American campuses are rather polarized on the subject of military history as a rule, and while it could have been my imagination, it seemed that more than a few of the non-veteran attendees in my proximity were highly uncomfortable with some of Dr. Hanson’s assertions and observations, especially those on the unchanging nature of man and warfare. Dr. Hanson made his usual iron-clad case on every point... which seemed to make some audience members even more uncomfortable.

In the Q and A portion of the session, the question as to the nature of future warfare and need for traditional forces was raised. Dr. Hanson stated that he did not completely agree with the Fukuyama point of view that we are at or near the End of History . Dr Hanson noted that even if the entire world was composed of liberal Western democracies, all it would take (due again to the unchanging nature of man) for things to start breaking down again would be for an “innkeeper in Austria or Denton Texas” to decide he/she didn’t like the way the world was going and start making statements to that effect, and start gathering fellow travelers who also believed in the same vision to start shaking things up. Since the world is clearly nowhere near a “Kumbaya” moment at this time, and judging by how the audience reacted, I think he may have provided some attendees serious food for thought. This moment, I believe, also served as solid ‘battlefield prep’ for the second lecture.

Dr Hanson’s most memorable anecdote that I had not heard before (or had forgotten), was used to emphasize the point that in warfare, it is the human and societal ‘will’ that decides when a war is over or 'won'. He recounted that he at one time knew that his father, who had flown as a gunner on B-29 missions over Japan, had landed in Japan after the war. He had assumed at one point that it had been in 1946 or later, until his father told him it had been in late August of 1945, immediately after the surrender and before the occupation of Japan was really underway. Dr Hanson asked his father if he wasn’t worried that someone might decide to try and kill them since they had been bombing Japan fiercely even before Hiroshima and Nagasaki. His father replied that no, he hadn’t been concerned at all. When he asked his father why he hadn’t been concerned, his father replied (I’m paraphrasing and working from memory here until I get a copy of the lecture) “Because we knew that they knew that we could just start bombing them again if we wanted to”. Unfortunately Dr. Hanson was dealing with some health problems and couldn’t stay for the book signing later in the day, but even though he was apparently in some pain, it was not obvious or really even evident when he was at the lectern.

Dr. Hanson’s experience in Iraq as he related it solidly reinforces the public position of CENTCOM and General Petraeus, and Dr. Hanson is still writing more revealing articles about his Iraq visit at his website.

There was venue change this year for lunch and the second session..... 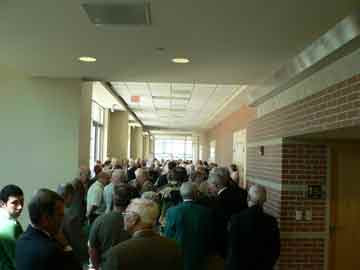 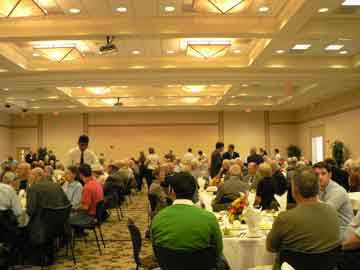 You can't really tell from the photos, but there were quite a few women and couples in the crowd and a good cross section of ages represented overall.
The Keaney Session 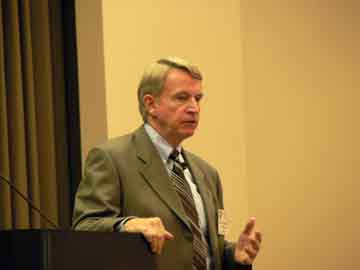 Dr. Keaney spoke after the luncheon. His topic “The Future of Warfare: Politics and Technology” went very much to the heart of the problems of modern defense planning. I particularly enjoyed his ‘timeline presentation’ where he pointed out that now in 2007, we think these x scenarios are the most probable futures, but did we think this ‘present’ was a probable future in 1997? Or did we think that we would be dealing with something else? Dr. Keaney was able to carry this analogy all the way back through the early 20th Century, pointing out that for every ten years going back in time, a significant disruptive event in the middle of that decade changed what we had seen as the future and were planning for, into a very different future that we then faced. He also pointed out that each of these possible futures that came true were not really surprises, but that they were known and had been previously tagged as ‘improbable’.

Dr. Keaney reminded the audience that during the Cold War, defense planning was easier because we had to deal with the Soviets and all other lesser contingencies could be dealt with as they popped up. Without a ‘big’ problem in front of National Security planners and the relative decline in defense spending (IMHO vital national defense is just as subject to ‘out of sight-out of mind’ stupidity as anything else), the consequences of picking the wrong ‘probables’ or even ignoring the ‘unlikelies’ are much greater. I thought this point was a great one to make because while it is all too obvious to those of us who lived and ‘fought’ the Cold War, there is a generation of academics, pundits and policy wonks out there now that only have an abstract and second-hand notion of the actual differences between then and now.

The most interesting question posed to Dr. Keaney was from what had to have been a young ‘emerging’ academic on the other side of the room and for some reason couldn’t have been asked without using the terms ‘Bush Administration’, ‘this Administration’ or ‘the Administration’ 4 or 5 times. Without the political emphasis it boiled down to:


The Commander in Chief had said that he was going to transform and streamline the military and now he is talking about adding/beefing up the military – what gives?

Dr. Keaney ably pointed out that what most of the young man was comparing was the ideas and plans of a Presidential candidate on the one hand, who on the other hand just a few months after taking office no longer had the luxury of a ‘quiet time’ in defense to carry out all the overhauling and changes that were originally envisioned. Dr Keaney also reminded the audience that defense "transformation" was not necessarily about changes in weapons and hardware, but about organization, processes, and communication (information age anyone?) and that while there were opportunities for ‘bargains’ in defense spending, not everything can be a bargain.

These are just my general observations of the seminar and may have more after I receive my DVD copies of the sessions.
Posted by SMSgt Mac at 17:28