...and is it in the right direction? 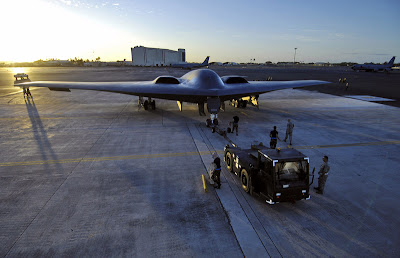 I'll reserve judgement until after the details inevitably emerge.

In today's announcement President Obama's Most Useful Idiot (why there seems to always be someone who until asked is NOT-generally-a-tool willing to be the front-man giving cover to Administrations that are malevolent and destructive to the national defense , I'll never understand) had this to say at least:

Finally, a major area of new investment for the Air Force will be a new long-range, nuclear-capable penetrating bomber. This aircraft, which will have the option of being remotely piloted, will be designed and developed using proven -- using proven technologies, an approach that should make it possible to deliver this capability on schedule and in quantity.

It is important that we begin this project now to ensure that a new bomber can be ready before the current aging fleet goes out of service. The follow-on bomber represents a key component of a joint portfolio of conventional deep-strike capabilities, an area that should be a high priority for future defense investment, given the anti-access challenges our military faces.

Of what was explicitly stated, I would only call the 'optionally-manned' criteria as 'gross stupidity' - and probably a product of an internal AF/DoD political schism . Being of a highly suspicious nature on this topic for some reason, we'll see what the emphasis on 'existing technology' means: could be 'good' but with this crowd one never knows.

The issue as to what kind of long range platform is needed and the open questions surrounding it were covered fairly well in a recent Air Force (Air Force Association) magazine article. The same source has a pretty good backgounder on the status quo here.

I might comment on the remaining gems and turds in this punchbowl of an announcement elsewhere. Alas, there's a few of the former and piles of the latter.
Posted by SMSgt Mac at 18:43