The AGM-65 Maverick missiles launched by A-10s were one of the most effective weapon combinations in Desert Storm.  This point should come as no surprise within the A-10 community, but again we are fighting against human notions and human emotions. During TASVAL 79, where the A-10's fundamental operational concepts and tactics were born, 57TFW (Tactical Fighter Weapon Center)  pilots initially tended to prefer attacking with the GAU-8 gun over the AGM-65 Mavericks. The short story is: They DIED...alot. TASVAL scenarios were very intense: realistic fluid battlefronts, and real and simulated threat systems that drove nap-of-the-dirt maneuvering, usually pop-up engagements, and coordinated attacks either with a four-ship A-10 flight, or a similar force working with Army attack helos. Towards the end of the deployment, experienced pilots would advise the replacement pilots to press with the Mavericks against the Air Defense first, use their missiles up THEN press with the gun. When they followed the old hands advice they lived. When they followed the 'Cult of the Gun' they were the only A-10 drivers 'killed'.

I never knew for certain if the 'lessons learned' from TASVAL had been carried forward until Douglas Campbell wrote about it in his (~9575%) definitive book [10/28/13: Just finished dissecting Campbell's thesis the book is based upon and now have serious reservations concerning the quality and selectivity of his sources] on the history of the A-10 "The Warthog and the Close Air Support Debate". His book has the first references I've ever read of  TASVAL (other than an Army Mental Health paper on the extraordinary divorce rates among Army participants at Fort Hunter Liggett) and confirms the lessons DID go forward.

But though the lessons went forward, so did the Cult of the Gun. Using the 'Gun' is visceral. I had conversations on this topic with my late Father-in-Law who flew the first F-4Es in SEA out of DaNang. He flew with the 4th TFS 'Fuujins' , then with the 366th TFW "Gunfighters". His favorite air to mud configuration was 20mm centerline and 2 more 20mms on the wings on top of his 20mm cannon in the nose. He likened the satisfaction of attacking with the gun to reaching out and touching the target.

I believe some of the same feeling he conveyed can be found in this C-Span Video interviewing Eric 'Fish' Salomonson and his wingman John 'Karl' Marks (Segment starts about 1:30 into the clip). These pilots 'killed' 23 tanks (and 10 damaged) flying three missions in one day. I remember watching this video the first time it aired. The 'pool' reporter asks some hilariously stupid questions at times so the whole video is pretty entertaining. At first I thought that the kill mix was 12 'gun' and 11 'missiles' because Salmonson mentions he had a 'bad Maverick' (~7:41) on the last sortie, but less than 10 seconds later he's asked about the mix and Salomonson tells the reporter the ratio was 17 kills with the Maverick and 6 kills with the gun. Keep that in mind as you watch the pilot's reaction at the ~11:20 mark when the reporter asks what it looks like when 'a Maverick hits one of the tanks' and listen to their comments: "huge explosion", "turret blew completely off", "spinning through air" etc. Then about the reporters ask (about the ~21:17 mark) about the effect of 'the cannon' and get in response: "not quite as big a boom", just "see flashes", "usually a little bit of a delay if it does light off"... etc ,,and then about 30 seconds of commentary on how it's harder to use (takes more skill).  But when they get asked (~21:54) about "of all the weapons" which weapon do they they prefer?

Lt Marks closes his eyes, smiles and then Salomonson says: "The Gun". 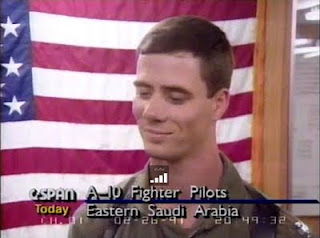 Salomonson elaborates further including closing his eyes for a moment as if to relive the feeling in his head as he says.... 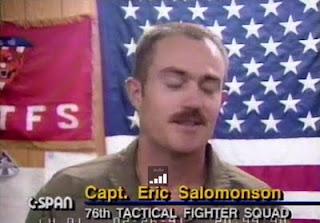 "There's nothing like it."
There's no better example of the visceral power of 'the gun' than this interview. 16 (oops) 17 certain nearly instantaneous kills with missiles vs. 6 'slow cookers' and 10 'possibles' with the GAU-8...and they prefer the gun.

We're such irrational beings aren't we?

Part 1: The “Big Two” Close Air Support (CAS) Myths
Part 2: Those "not so good old days”
Part 3: Vietnam and the Rise of the “No-CAS Air Force” Myth
Part 4: Origins of the A-X Program
Part 5: Defining a New CAS Platform: the Evolution of the A-10
Part 6: A-10s 'Forever' ?
CAS Myths Sidebar: Army-Air Force Views on CAS and Airpower
Posted by SMSgt Mac at 22:39