Update: DefenseTech has a thread going now that couldn't be a better example of the Power of Myths.

Update 2 (6 Feb 12) DoD Buzz has another thread going that couldn't be a better example of the Power of Myths.

Because the Vietnam War would be a war fought quite unlike those before it, the 'lessons learned' from earlier conflicts proved to be less than ‘completely’ helpful in Southeast Asia. It is not that Vietnam could not have been fought much like WWII, or even Korea, but that the lessons were less than useful because Vietnam was not fought as wars before it. Political exigencies and choices made by the US civilian leadership to NOT risk escalation through more 'vigorous' execution minimized the impact of the past lessons learned. It is well documented, that when North Vietnam risked its forces with more exposure through more conventional military operations their forces were dealt with decisively by air interdiction and ground forces, and that when we chose to pursue aggressive strategic bombing and mining of the North, such efforts (as in 1972’s ‘Linebacker II’) produced decisive military results.

Changes in Army Operational Doctrine Gives Rise to the CAS Dispute
As outlined in Andrew Krepinevich’s 1986 book “The Army and Vietnam”, the conflicts and issues between the ‘Regular’ and ‘Airmobile ‘Army factions in the early 1960’s can be viewed as the factors that essentially forced the greater conflict with the Air Force. The Airmobile advocates (such as General Robert R. Williams) really wanted to prove their concept in a higher-intensity conflict arena than Vietnam and feared that proving the concept in Vietnam would not be enough to convince the non-believers in the Army that Airmobile Forces were desirable in a more conventional role. But the ‘Regular’ Army adherents would not entertain the conversion of heavy forces to airmobile forces for conventional warfare purposes. It was only due to pressure coming from the OSD that compelled the Army to do ‘something’ and form the first airmobile division. In “The Army and Vietnam” Krepinevich appears to address these internal and external conflicts as separate issues, yet much of how we recounts the history unfolding virtually screams to this reader that it was Army Airmobile ambitions and internal friction that fueled the push for organic winged (albeit ‘rotary’) fire support, and it was this push that fueled the Army-Air Force conflict on the same subject. I believe this perspective is reinforced by known events and actions leading up to (for the lack of a better term) ‘major ground involvement’ in Vietnam.

By 1965, the Army, in the pursuit to improve their attack helicopter capability to support their air assault concept, had been increasing the spending for upgrading armament on the existing ‘interim’ AH-1 and was well along in working towards fielding something called the Advanced Aerial Fire Support System. Readers will more likely know it as the AH-56A Cheyenne if they know of it at all. Existing DoD doctrine in 1965 allowed the Army to pursue rotary wing solutions to providing ‘suppressive fire’ support that could augment but not replace CAS. The Army was thus developing its ‘Airmobile’ doctrine and sought to expand acquisition and use of both rotary and fixed wing aircraft to support it. In particular, the Army's effort to acquire more Caribou and Mohawk aircraft was seen as trespassing into AF missions and the effort was shot down at the SecDef (yes, ‘McNamara’) level and NOT at the Air Force level. Lest one assume this was due to some ‘anti’ army-aviation bias on the part of Secretary McNamara, it should be noted here that it was McNamara who supported the Air Mobility advocates within the Army in standing up Aviation Brigades. McNamara’s support was given in opposition to the positions of the more conventional warfare advocates, up to and including supporting the diversion of funds from heavy divisions to acquire Airmobile capabilities, and such support was given years before America moved beyond the ‘advisory’ stage in Vietnam.

The 'fixed wing expansion' attempt shot down by McNamara, combined with the Army's efforts to field the Cheyenne (the roots of which also reach back to circa 1962 before major involvement in Vietnam) was seen by some in the AF as proof of the Army's intent to expand beyond the 'suppressive fire' mission and into the CAS arena. This was due to the quantum leap ahead in rotary-wing capabilities (high speed, advanced avionics, 30mm gun, grenade launcher/mini-gun, etc) that the Cheyenne represented. 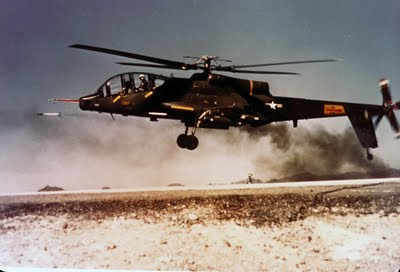 Lockheed AH-56 Cheyenne (US Army Photo)
Indeed today, the Cheyenne is often thought of as a ‘hybrid’ (helo-fixed wing) design. This apparent attempted ‘mission creep’ on the part of the Army did nothing to reduce tensions between the AF and Army.

There were Congress-critters taking sides (largely the Army’s) in the debate, and one in particular, U.S. Representative Otis Pike, played a major role in bringing things to a head. He convened a hearing in late '65 and his committee’s findings released in early 1966 criticized the AF for not being more “serious” about fielding a better CAS capability. These findings were in spite of the on-going AF effort to field an interim platform (The quite effective ‘fast-mover’ A-7D) while searching for a more permanent solution. IMHO, Pike’s background as a WWII Marine aviator probably ‘poisoned the well’ on the issue, since Marine Aviation’s sole reason for existence during WWII was to support the Rifleman on the ground. Like many of my ground-dwelling brothers-in-arms, Pike probably confused/confuses CAS with Airpower, instead of recognizing the first as a subset of the second. As it will be noted later, in reality the Army was generally happy with the AF’s CAS capabilities with the only exceptions related to helicopter escort operations, so it appears that ‘someone’ was overstating the case against the AF on CAS for reasons that are anyone’s guess.

There was a behind-the-scenes cooperative effort at the highest levels that occurred within this highly politicized environment to resolve -- or at least lessen--the ‘CAS’ friction between the Army and Air Force. In the Spring of 1966, the Army Chief of Staff General Harold Johnson and Air Force Chief of Staff General John McConnell “met secretly to resolve air support differences that the Vietnam War had aggravated” (Douglas Campbell, “The Warthog and the Close Air Support Debate”). They arrived at a compromise agreement that changed the criteria for dividing responsibility from aircraft weight to aircraft type. The Army was thus allowed to provide helicopter fire support and the Air force retained the CAS mission. As in all compromises, no one was completely happy.

A cynic would assume that the Army, or at least nefarious members thereof, were consciously attempting a turf takeover to support their Airmobile aspirations. But a more likely (to me) explanation is that the situation at the lower levels of command was more along the lines of the Army Airmobile commanders wanting to control as much of their own destiny as possible by making as many of their ‘fires’ as organic as possible and at all times, including when in contact with the enemy. This desire has appeared to have been pursued with single-minded purpose since the earliest days of Vietnam to the modern era, without too much concern for the unintended consequences to the overall ability to eliminate the enemy, or reducing his capabilities PRIOR to contact. [I believe Desert Storm and Iraqi Freedom operations and AF-Army friction during give some validity to the second explanation.] Pick your own root cause, but all the evidence suggests Army commanders have consistently demonstrated an insular and expansionist tendency that clearly flags them as the chief instigator of friction between the services on the CAS issue. I assert that what will follow is some fairly strong evidence of the Army’s culpability in fostering the ongoing interservice conflict over CAS.