The evolution of a WW1 tribute to destroyer crews.

(Something different for Veteran’s Day )

Berton Braley is little heard of today, but early in the 20th Century he was quite a celebrity…and prolific poet. I wonder how much his obscurity today is due to him being a commercial success AND a ‘Philosopher of Freedom’? I discovered him quite by accident, trying to track down the origins of a poem titled “Destroyer Sailors” that my Grandfather had scribed in the back of his ‘Cast Iron College’, aka Machinists Mate School, notebook in 1926. He attributed the work to ‘Sunset Red the Poet’. Using that as a starting point, trying to find who wrote the original turned into an interesting journey: it appears the poem has been adapted to different eras, with slightly different titles, and attributed to various people as it has been handed down through time. The original poem was written during World War I, titled The Destroyer Men, and back when ‘destroyers’ themselves were relatively new:

THE DESTROYER MEN
There’s a roll and pitch and a heave and hitch
To the nautical gait they take,
For they’ re used to the cant of the decks aslant
As the white-toothed combers break
On the plates that thrum like a beaten drum
To the thrill of the turbines might,
As the knife bow leaps through the yeasty deeps
With the speed of a shell in flight!

Oh ! their scorn is quick for the crews who stick
To a battleship s steady floor,
For they love the lurch of their own frail perch
At thirty-five knots or more.
They don t get much of the drills and such
That the battleship jackies do,
But sail the seas in their dungarees,
A grimy destroyer s crew.

They needn’t climb at their sleeping time
To a hammock that sways and bumps,
They leap kerplunk ! in a cozy bunk
That quivers and bucks and jumps.
They hear the sound of the seas that pound
On the half-inch plates of steel
And close their eyes to the lullabies
Of the creaking frame and keel.

They scour the deep for the subs that creep
On their dirty assassin s work,
And their keenest fun is to hunt the Hun
Wherever his U-boats lurk.
They live in hope that a periscope
Will show in the deep sea swell,
Then a true shot hits and it s "Good-bye, Fritz"
His future address is Hell!

They’re a lusty crowd and they’re vastly proud
Of the slim, swift craft they drive ;
Of the roaring flues and the humming screws
Which make her a thing alive.
They love the lunge of her surging plunge
And the murk of her smoke screen, too,
As they sail the seas in their dungarees,
A grimy destroyer s crew!

As you can tell from the original, it would have been quite dated post-WW1 if it hadn’t been allowed to evolve. Here is the version of the poem again as my Grandfather put it to paper less than a decade after WW1, titled ‘Destroyer Sailors. I submit this is may be the earliest record of the post-Braley versions, as it is the earliest I could find. 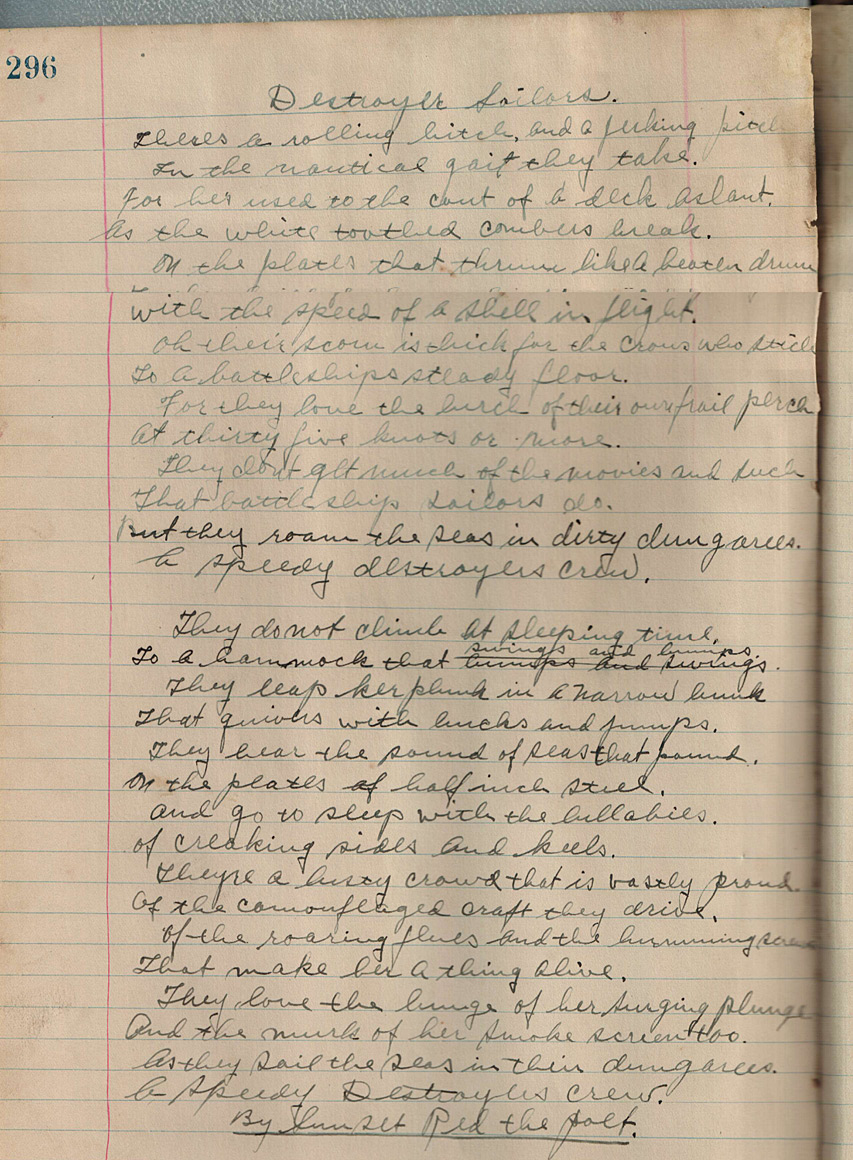 Read more Berton Braley online here, or more about the man and his works here.
Posted by SMSgt Mac at 16:28