(Updated and Bumped for comparison.)

Gee, has it been a year already?
In the original post below, among other things I demonstrated/showed:
1) That the official F-35 cost projections at the time had been  complete 'fails' and that production costs were tracking closer to LM's projections than anything else and much lower than the CAIG's.
2) That there was a disconnect between what the Government was 'budgeting' and what they expected the costs to be.
3) The scary Mod dollars that will be needed to retrofit LRIP 1-4, when added to the initial costs appeared to STILL be within reasonable estimation of LM's production numbers.

The USG has negotiated the LRIP 5 production numbers and it looks like the trend continues. Here's the relevant part of the official news release (Bold italics mine):

Principle Agreement Reached on Fifth production lot of Lockheed Martin F-35s WASHINGTON, D.C., Nov. 30, 2012 – The U.S. Department of Defense and Lockheed Martin have reached an agreement in principle to manufacture 32 F-35 Lightning II stealth fighters as part of Low-Rate Initial Production 5 (LRIP-5). The contract will also fund manufacturing-support equipment, flight test instrumentation and ancillary mission equipment.
“It’s been a long journey, but I’m pleased we’ve achieved an agreement that is beneficial to the government and Lockheed Martin,” said Vice Admiral Dave Venlet, F-35 Program Executive Officer. “Production costs are decreasing, and I appreciate everyone’s commitment to this important negotiation process. The LRIP-5 agreement will end the year on a positive note and sets the table for the program to move forward with improving business timelines for the greater good of all the nations partnered with us.”


There's already the usual crowd trying to do 'math' beyond their ken, simply dividing the total by the number of jets, and not realizing that not all in the $ amount is accountable against the unit cost. You've also got the usual mixing of cost numbers in the usual quarters.

But lets play the 'stupid' game for a moment and just divide the total by the number of jets like a Rube, thus averaging the cost of the variants in the process shall we? Using a 'popular' source we get a total cost of $3.8B for the buy, which translates into a $118.75M 'estimate' for the LRIP 5 jets. Now trace down to the graphic below from last year (I'll post an updated version with the latest actuals later) showing an official Canadian government chart with cost projections and actuals for just F-35A (the least expensive) aircraft.

That's right. Even using the inflated simpleton-math estimation method above, the F-35 is STILL tracking to slightly below LM's lower cost predictions and nowhere near the 'feared by some and hoped-for by others' "official" numbers.

Skip the breathlessly headlined Bill Sweetman "Article of Doom" for now (it will make it just that more entertaining if you go back to it) and go to slightly less 'vapourous' article he linked to as the source at AOL  (I know! Whooda' guessed AOL was still around?).
There are many parts of the original article that I find most interesting, given the responses to it in the blog comments I've seen so far.
In no particular order:

But slowing production would help reduce the cost of replacing parts in jets that are being built before testing is complete, Venlet said. Although fatigue testing has barely begun -- along with "refined analysis" -- it's already turned up enough parts that need to be redesigned and replaced in jets already built that the changes may add $3 million to $5 million to each plane's cost.
The price of the F-35, being built by Lockheed Martin Corp. in three variants, has averaged roughly $111 million under the most recent Low Rate Initial Production (LRIP) Lot 4 contract.

So now the unit retrofit mod costs estimates are 50-70% lower than the previously "feared" $10M/unit costs that were 'estimated' only three months ago? Hey! That's 'Crack-ing' GOOD news! And since the LRIP contract costs to-date have BEAT predictions, that means that even with the retrofit costs, it looks like the the total unit costs are coming in at or near program predictions and are still nowhere near the widely circulated B.S. CAPE estimates.
But doesn't this 'Cracks of Doom' thing kind of' support the assertion that the F-35 is the (to quote a Sweetie*) "most incompetent and wasteful fighter program in history"? Umm - no.

*A member of the 'Sweetman' Tribe

Nor are the weaknesses surprising in the world of fighter jets, he added. The discoveries are "not a quote 'problem with the airplane,'" Venlet said. "It's a fighter made out of metal and composites. You always find some hot spots and cracks and you have to go make fixes. That's normal.

Gee. I wish I had known that. Oh yeah. I do. The article doesn't go into the 'why' this is so, but it is simple enough. For performance reasons you have to make the plane's structure as light as possible and it is always easier to put weight in where it is needed than take it out. Structural tweaks are usually a mix of both in the end, with the emphasis on adding structure for durability.
When Vice Adm Venlet is claimed to be calling for 'slowing down' F-35 production. In what "way" is it meant?

Venlet declined to say how much he thinks production should be slowed. Earlier plans called for the Pentagon to order 42 F-35s in fiscal 2011, but that was cut to 35 and more recently it was dropped to 30. Previous plans, which Venlet's comments and the unprecedented pressure to cut the defense budget make clear will change, had been to ramp up orders to 32 in fiscal 2012, 42 in fiscal 2013, 62 in fiscal 2014, 81 in fiscal 2015 and 108 in fiscal 2016 before jumping to more than 200 a year after fundamental fatigue and flight testing is done

.The Admiral is concerned about the steeper ramp up that exists as a result from Congress cutting the buys on the front end? Surprise! (Not.) (Think of trying to climb a flight of stairs where the first 5-6 steps have been lowered but the rest still lead to the top floor). This approach has risk advantages and it has risk disadvantages (as from time to time I've had to expand upon for the some of the more obtuse among us), and must say that I disagree with the idea from a 'risk' and 'total cost' POV. I disagree because I believe it is better to aim high and possibly fall a little short 'sooner' than to aim lower and only possibly hit your target 'later'. The reason being is that the near term risks are always better known than those that might transpire in the future. Vice Admiral Venlet knows this as well, so what would REALLY drive him to consider it?
This next bit is the most bothersome part for me.


Venlet also took aim at a fundamental assumption of the JSF business model: concurrency. The JSF program was originally structured with a high rate of concurrency -- building production model aircraft while finishing ground and flight testing -- that assumed less change than is proving necessary.

"Fundamentally, that was a miscalculation," Venlet said. "You'd like to take the keys to your shiny new jet and give it to the fleet with all the capability and all the service life they want. What we're doing is, we're taking the keys to the shiny new jet, giving it to the fleet and saying, 'Give me that jet back in the first year. I've got to go take it up to this depot for a couple of months and tear into it and put in some structural mods, because if I don't, we're not going to be able to fly it more than a couple, three, four, five years.' That's what concurrency is doing to us." But he added: "I have the duty to navigate this program through concurrency. I don't have the luxury to stand on the pulpit and criticize and say how much I dislike it and wish we didn't have it. My duty is to help us navigate through it."

I find it hard to accept this passage as written. The second paragraph containing the quote is harmless (though kind of emotional for a PEO of a major weapon system program) as it stands, but the first paragraph that prefaces it smells of willful misdirection. Most people would read the passage as Venlet is asserting 'concurrency' was a miscalculation. But more likely the passage should be read as estimates of the amount of change that would be needed as the program progressed was a miscalculation. Why do I believe this? Because 'concurrency' itself has been analyzed and studied to death (Though Congress uses it as an effective bogeyman). I'm certain Venlet wanted to deliver the first jets in final configurations, but certainly he has the training and background to be aware of the realities in the job. I wonder what, if anything, the author of the original article is leaving out?
The AOL article closer has the bottom line:

"Can we afford it?" Ah! There's the rub. It strikes me that from earlier in the article there's a kernel of what might be the 'real' cost problem.

"We negotiated the LRIP 4 contract with a certain amount of resources considered to pay for concurrent changes," Venlet said. "We were probably off on the low side by a factor of four. Maybe five. And we've discovered that in this calendar year, '11, and it's basically sucked the wind out of our lungs with the burden, the financial burden."

That is most interesting in the sense that the comment relates to what was 'budgeted' and not what was 'estimated'. Remember this chart? (It's in some of the linked material above as well.) 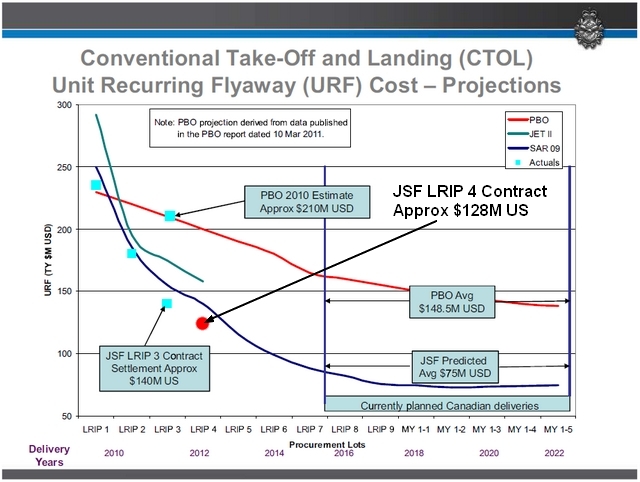 I suspect the budget shortfall has as much to do with how the costs have been amortized across fiscal years as it has to do with the fact that the contracts were negotiated for amounts less than even the JSF projected cost curve. Notice when this chart was made, the LRIP 4 jets were to cost approximately $128M in the end. Use the dollar figures provided in the AOL article: $110M plus $3-$5M for the retrofits. What is 'missing' from this equation?  The LRIP 4 share of the weight reduction effort? [I cannot let an opportunity pass to also remind readers, once again, that even WITH all the "costs" being thrown about so carelessly, the totals to date STILL more closely track the lower internal program estimates than any other estimate and the B.S. CAPE estimates are still the outlier by far.]

This whole 'slow the ramp up' story IMHO is a narrative constructed to explain constraining the program more for reasons of immediate budgetary convenience than anything else. The program's successes this year may have brought about the need for the narrative.