The UK's National Audit Office has a report out called "Carrier Strike: The 2012 reversion decision". In the report, the findings are generally positive: The UK switching back to the B model is seen overall as a "good thing".  That should be the end of the story. But.....

If someone didn't know squat about the science of flight, military flight operations, and the relevant physics involved, that someone-- and I'm not saying who -- might be tempted to cherry-pick a certain paragraph in a lame attempt to paint a new operational fact of life (now being dealt with) that comes with increased STOVL capabilities as a 'problem' with the F-35B. The "offending" report paragraph that 'might' be distorted 'might' be (emphasis mine):


3.10 An important enabler of the UK’s STOVL Carrier Strike capability will be the ability to conduct Ship-borne Rolling Vertical Landings (SRVL). This landing technique will be necessary where a conventional vertical landing is less likely to be possible without jettisoning large weapons or fuel load when in hot, humid or low pressure weather conditions. At present the technology is not proven with redesigns required to the carrier deck and aircraft software. The capability will be required for operations by 2020 and the Department included a provision to complete development as part of the cost of reverting to STOVL. The Department is confident it will develop the technique within the required timescale.

If someone were to pervert the above into something like: "The report says that the F-35B will have no vertical landing ability in hot, high density altitude, low pressure situations “without having to jettison heavy loads”, it might -once again- be helpful to provide some perspective showing that it is something new the F-35 program has to deal with because the ability to bring back a significant weapons load in all but the most benign conditions by a STOVL aircraft has never been possible before .

Let's take a look at the performance of the highest performing STOVL aircraft the F-35B is replacing: the AV-8B. From the AV-8B's Standard Aircraft Characteristics publication NAVAIR 00-110AV8-4 (1986), we first find the important 'weights' for the AV-8B: 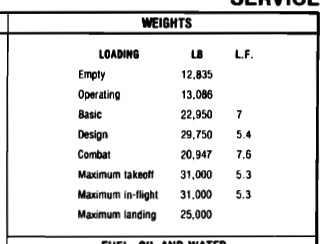 The first key weight we'll note is the 'operating weight': 13,086 lbs. Now let's look at the maximum landing weights versus temperature chart for the AV-8B. The 'wet' thrust is assuming the water injection system was not used on takeoff, but on a hot day, we'll see later that this is pretty much a non-factor: 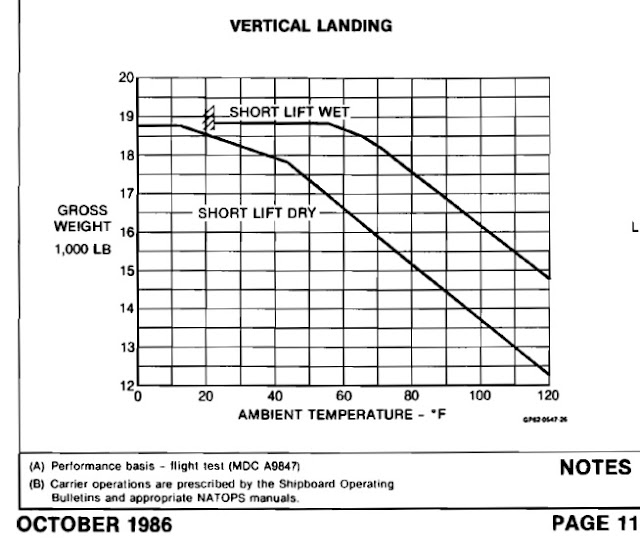 The first thing these two charts tell us is that you aren't going to be vertically landing so much as vertically crash-landing the AV-8B on a 'hot' day unless you are on fumes with NO payload. Even then it is going to be 'sporty' to say the least: 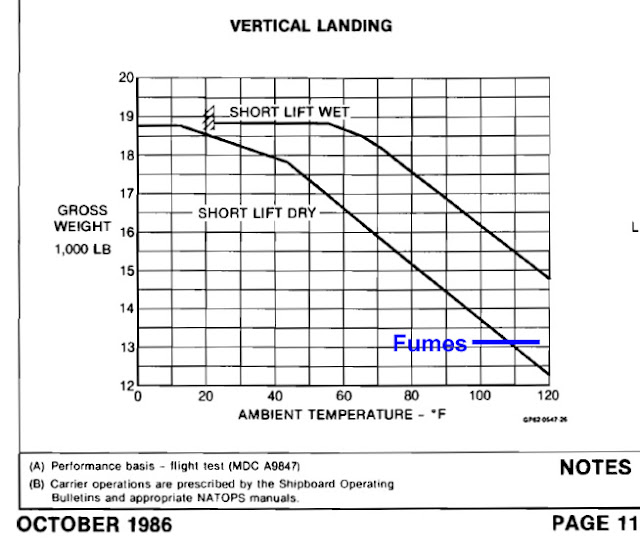 But the really wild thing here is if you are operating off a deck afloat in the 'tropics' you had to do a rolling takeoff, using about 90%+ of the available flight deck, and you were only able to do it if you had 40 knots of wind over the deck. With less deck or wind you weren't leaving with what you wanted to take with you in the first place. You'd have to leave fuel behind and 'tank up' en route. 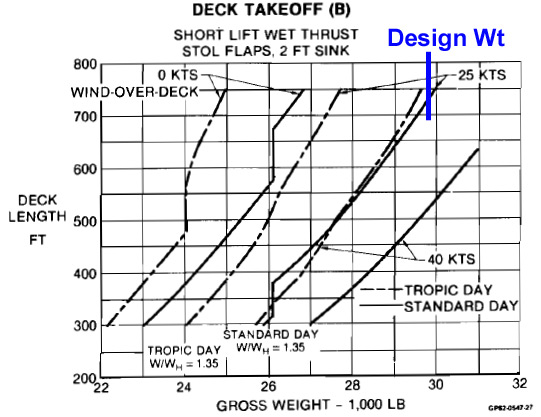 From this last graphic, we can see chances are that on a heavy-hot-high mission, the AV-8B probably used its water injection system just taking off.

We can also infer that the current rolling takeoff spec for the F-35B of "600 foot" allows growth for much higher takeoff weights. This should make development of the "Ship-borne Rolling Vertical Landings" (SRVLs) an irresistibly attractive option for the USMC: If you can takeoff with 'more' you want to be able to land with 'more'. I suspect that the USMC will probably be on board with the concept before the Brits even begin operations. Pursuit of an SRVL recovery method is clearly more about eventually fielding MORE capability than currently planned and NOT about preserving current projected capabilities.

The whole idea of vertical 'bring back' weight is mostly about meeting a 'cost' objective by lowering operating costs incurred by jettisoning stores and is NOT and never has been an 'operational' problem. The weights under what conditions were selected almost certainly on a cost/benefit basis. I would assume either the number of days in a F-35B's operating life where temperature and humidity would conspire to affect the normal 'bring back' weights as negligible or the cost to allow for them exorbitant. Otherwise, the requirement would have been factored into the specs in the first place.
Posted by SMSgt Mac at 10:49

The Harrier has been littering the world’s oceans with ordnance for decades.

There is a great deal of misunderstanding about Vertical Launch Bring Back weights with the F35, especially in the UK and the National Audit Office are basically risk and money experts, I guess the equivalent of your GAO.

The mainstream media reporting on the subject in the UK is woeful, they translate the level of uncertainty with this issue to ‘jets can’t land in hot weather’ type headlines, even the sensible and grown up papers.

Where VLBB is more important for the UK than I suppose it is for the USMC is because the UK, if operating alone, would not have the cover provided by USN and USMC fixed wing fast jets operating from CVN’s.

The UK’s climatic conditions for landing weights in vertical recovery are actually more stringent than the KPP. SRVL has been in development for some time, using QinetiQ’s VACC Harrier.

RE: Why the USMC don’t seem to be interested in the almost ‘free lunch’ provided by the Ski Jump.

I've wondered about that in the past as well. I think it came down to deck space needed for the mixed helo and Harrier combat ops tempos. I also suspect doctrine played a role ('train like you fight' and "keep operations close to the fight").
They might also have viewed using ramps as either doubling TO training techniques/practice or having to carrying a number of deployable ramp kits for hauling ashore.
-Best Regards